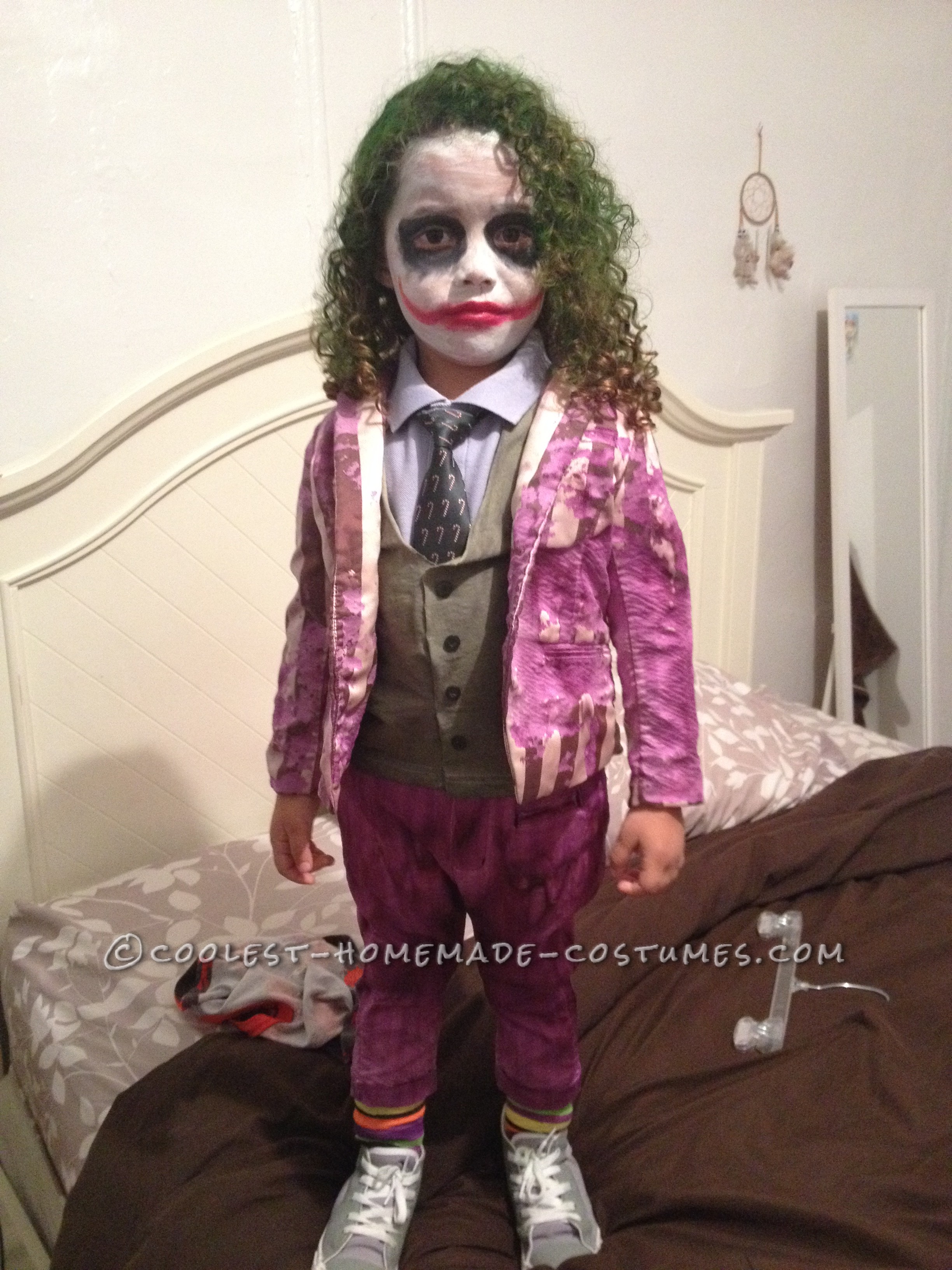 Let me start off by saying “I’ am a very crafty girl, I love to create things”. So this year, as a last minute idea for my three year old son Liam, I decided to dress him up as the joker.

I didn’t want a store bought costume because it just looks too cheap. So, as Halloween was fast approaching, I couldn’t decide on what to have my son dress up as. See, last year he was Beetlejuice, which was awesome. Everyone was in love, so I knew that this year I had to top last year’s costume.

For the Beetlejuice, I didn’t buy a regular costume. I bought him a Black and white stripe suit from H&M. So this year, I used the exact suit; thankfully, it still fit him, a little snug and high water, but it fit. I took the black and white suit and placed it in a garbage can filled with bleach to get the black strips out, which worked out great. The bleach also made the blazer look distressed which gave it a unique touch.

Once the suit was all bleached, I ran it through the wash. Then I bought one box of purple RIT dye which I found at my local 99 cent store that just made me super happy. I didn’t have to travel to Michaels or Joann fabrics. I then placed it in the garbage can to begin the dyeing process. I left it in for about one hour. Once I took it out, I rinsed out the excess purple dye and water and laid it flat to dry. I didn’t wash it in the washer because I didn’t want the purple to rinse out and be too light. So, the pants and blazer were done, now on to the green vest.

I found it difficult to find a green vest, so I was thinking and thinking and I got the brightest idea. I took one of my son’s plain white t shirt and I bought a green RIT dye and dyed the t shirt green. Once it was dyed, rinsed and dried, I made a deep v-neck with scissors. I then grabbed the front of the shirt from the end of the v-cut and at the bottom of the shirt and creased it over to my left to give it the illusion of a closed vest ( hopefully you understand what I’m trying to say). I then took my handy dandy glue gun and glued it down.

I took a trip back to the 99 cent store and bought a bag of small buttons. I took out five green ones and glued them down the front of the shirt “vest” so it would look like a vest. It came out really nice. The light purple Janie and Jack polo he already owned, it was gift on his second birthday he never wore so that went perfect. I then used his green candy cane tie from last Christmas. I bought him a Batman trick or treat bag, some colorful socks from party city and put on his Grey converse and he was all set to go. Oh wait, the makeup and hair.

I put on some 99 cent white cream for his face, used my black eye pencil and shadow for his eye area and my red wet N’ wild Fergie lip stick, and green hair spray from party city. Believe me when I say that once we stepped out onto the streets, everyone was amazed with him. They were snapping photos left and right. They were amazed how it was home-made. When I explained briefly the process, they were in awe. I even got an offer from one mom to buy the costume from me for her son next year. But I want to keep this for memories of my son’s 2nd and 3rd Halloween. He did Beetlejuice and the joker with the same suit. So I spent little to nothing to put this together; it made my wallet very happy.

My favorite part of this was seeing how happy my three year old was every time he saw me working on it. He would just be so anxious to try it on, and to get the make up on. I was so happy with the way the blazer, pants and t-shirt vest came out. I really enjoyed putting this costume together. Being creative brings joy to my heart. I love to create unique things; it gives it more sentimental value because it was made with my own two hands. Who knows if 30, 40 years from now I have a grandson and he can be the joker. Everything about this costume was perfect. 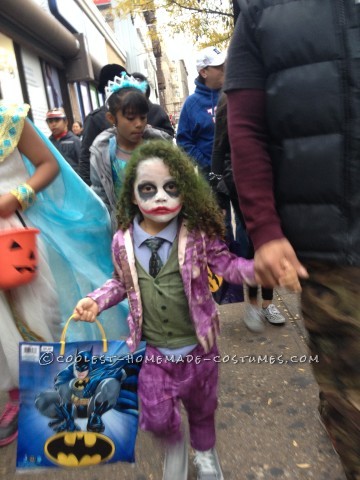 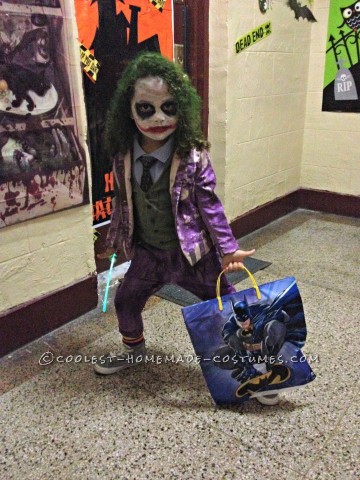 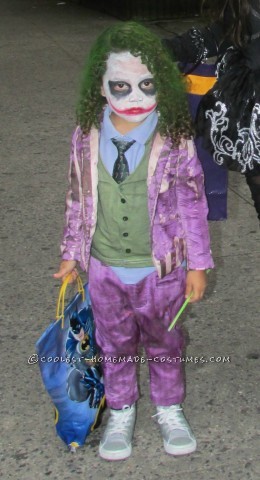 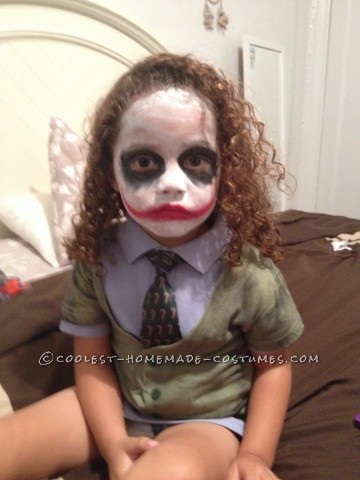 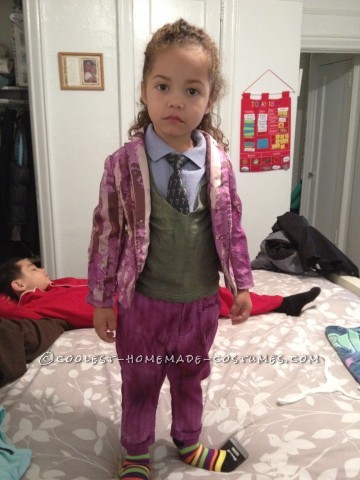 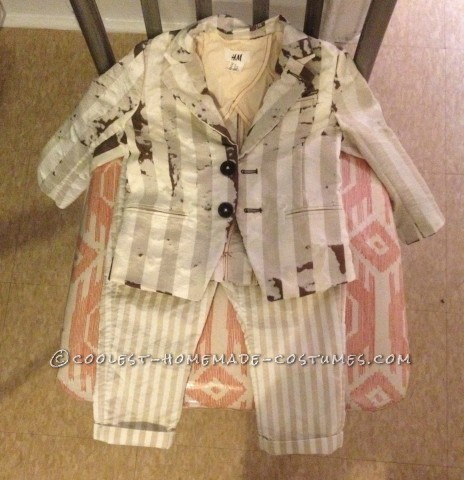 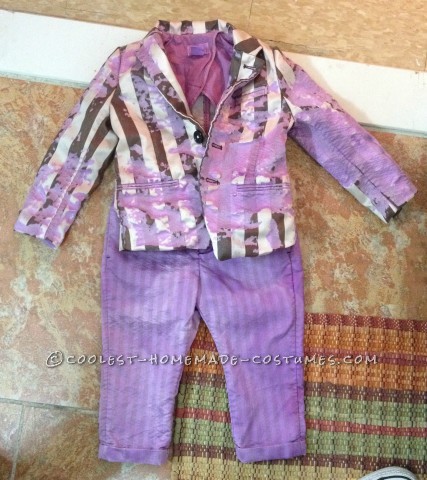 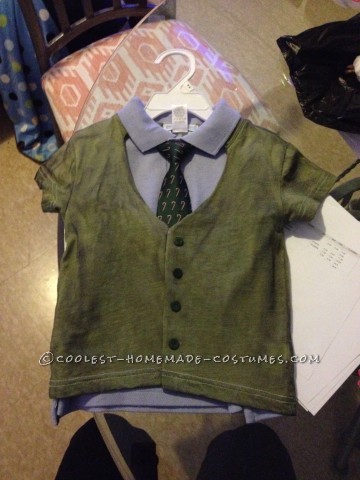 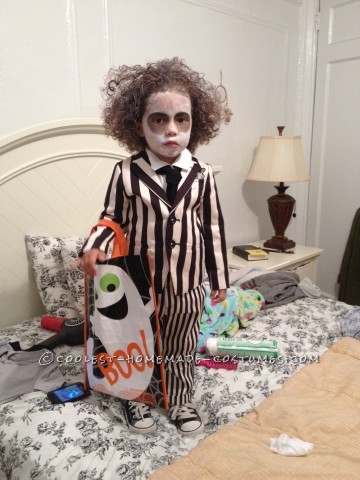