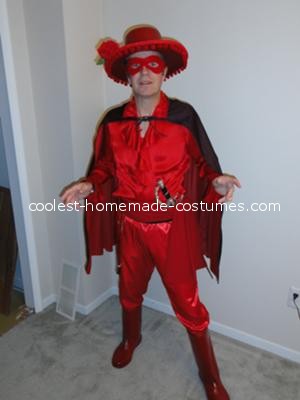 One of my favorite comedies stars George Hamilton as Zorro and Zorro the Gay Blade. The costumes are great in the movie. So I wanted to make one.

I started by going to the Thrift Stores and seeing what I could find for the Gay Blade costume. There I found what I needed. I found a red silk blouse and some ladies red pajama bottoms that needed to be taken in by my wife.  On another trip I found the cape. The hat was a black Zorro hat that I painted red. The hat trim came from Joanne’s.

The whip was made from coax, tape and paint. The sword was store bought but I added bling to it. The sash was just red material I had at home. The boots were made from pet screening, duct tape and paint. Then I glued a rose on the hat and added rose trim to the shirt and hat. The mask was just red felt that I cut out. The entire costume was less than $25. I also bought some red silk gloves for the final touch.

My wife dressed as the regular Zorro. That was a costume I had made several years earlier. I had several people wanting to take our picture so I guess it was a success.