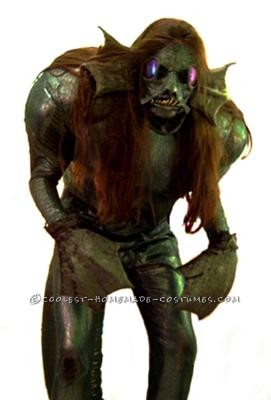 This swamp monster, officially dubbed as Seymour Fishgerald, started out as a simple concept sketch. The idea came to me as I was talking to the supervisor of a local haunted walkthrough. As we discussed our ideas for how to scare the pants off of poor, innocent people for the seasonal Haunted Hollow, I realized that my costume didn’t have to look human. A day later, when I accidentally discovered my fish-man growl, that settled it. By golly, I would make a swamp monster costume for the Haunted Hollow.

But where to start?

You’ll need a lot of:

I admit that the entire costume from head to toe was trial-and-error. Since it was my first-ever attempt at building a creature, I borrowed many different ideas from various sources and smushed them together in the hopes that my creature would turn out somewhat how I hoped he would. We’ll start where I started: the torso and the tail.

An old T-shirt (I went with a large, floppy one)
Foam, batting, or both
Scissors
Hot glue
Floss

I wanted Seymour Fishgerald to be big and bulky, but still slender. In order to do this, I only built up the shoulders, back, and chest area. The foam I used was relatively thin, so I spent a lot of time hot-gluing pieces together.

Start by cutting out the muscles, but don’t worry about making it too realistic—the body suit will eliminate a lot of detail. Be sure to have plenty of hot-glue on hand, and use floss to sew the bulk to the neck of the T-shirt. (floss is much stronger than thread.) I built the majority of the back area out of batting rather than foam simply because I had a limited supply of foam. A lot of the batting had to be removed because I’m such a tiny person and it looked odd at first.

My mom oversaw the whole tail operation. She started by sewing a tail-like shape out of an old bed sheet, then she tore apart some old pillows and stuffed the sheet with the foam bits. After stuffing, we sewed up the gap to keep the foam from spilling everywhere. For the alligator-like bumps on the back of the tail, we hot-glued plastic outlet protectors to the sheet. The silver spandex went over it all like a sock, and then it was attached to the batting back with hot glue. Lots and lots of hot glue.

**Important Note: The torso and the tail are attached to each other. Because the tail is fairly heavy, it pulls back and chokes the wearer. To compensate for this, we sewed two long heavy-duty straps of fabric to the front of the neck of the shirt, tightly wound one strap around each leg, and pinned them under the feet. Now, simply standing up straight will readjust the position of the torso and allow you to breathe freely.

I built the base of the mask onto my own face, alternating between layers of liquid latex and toilet paper. (If you use this method, spread some Vaseline over your face and around your hairline before you begin, unless you want to lose your eyebrows when you pull off the finished product.) This process alone takes up a good chunk of the time.

For the eyes, I attached sunglasses lens to the sides of my face using the liquid latex/toilet paper method. It’s important to not to cover your eyes completely with the lens, especially if you wear your costume out in the dark.

When you finish the base of the mask, allow it a day or so to cure completely. Now, you can begin gluing the spandex down over the mask. Rather than gluing on little bits and pieces of the fabric at a time, though, I attached it all in one big chunk to eliminate any obvious, distracting cuts. This added an interesting crease between his eyes, but it gives him character.
I had another fabric that I Mod Podge’d over the spandex—a green, sparkly mesh-like one. I used this same material over the rest of the spandex bodysuit and tail to give Seymour some texture.

His teeth are a cut-up toilet paper roll covered in liquid latex and painted with brown acrylics. Because the teeth are essentially cardboard, they flop after a while of breathing. Even so, they’ve held up pretty well and after over thirty hours in costume haven’t yet needed to be replaced.

Glue the black see-through fabric on the inside of the mask, over the eye and mouth holes. Now that you’ve got a full mask, you don’t have to wear makeup to hide that lovely, distracting, fleshy color of yours. Sew an elastic to the mask so you can easily slip it on and off.

My mom was the designated seamstress of this costume. She essentially put together a one-piece jumpsuit from scratch out of the silver spandex and the green meshy stuff. (Thank heavens that we had extra spandex, because we had no idea what we were doing.) Make sure it’s not too loose on the shoulders, otherwise you’ll get a wrinkly monster.

There are two zippers: one on the shoulder and one down the back. Large elastics looped under the feet keep the pant legs from riding up, no matter how much you move around.

There’s a big, gaping hole in the back for the tail to fit through.

**Important Note: I can’t get in or out of this suit on my own, thanks to the zipper on the back.

I had pink carpet foam conveniently lying around. I suppose any foam will do, as long as it can take a beating. Out of the foam, I designed, traced, and cut out the basic fin shapes that I wanted for the hands, feet, tail, and ‘ears’. Then, I built up the areas where the ridges would be and hot-glued them down. My dear, sweet mother sewed some ‘gloves’ for all of the fins out of a differently-colored fabric found on clearance. The feet-fins have a loop of elastic on the bottom that you can easily slip a shoe in. Slip the fin over the shoe, put your feet in the hole and voilà! Instant monster feet.

The HAIR: many years

Yep, that’s my real hair you see hangin’ out.

This costume will get hot. I live in an area where the Octobers are plenty chilly so I didn’t have to worry too much about it, but the foam holds in heat. Stay hydrated, take off your mask periodically, and don’t be hesitant to ask someone to help you take it off if you need a breather.

Specific questions? Go ahead and ask! I’ll do my best to answer. 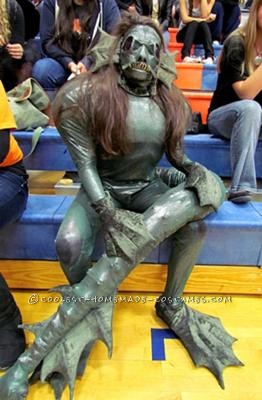 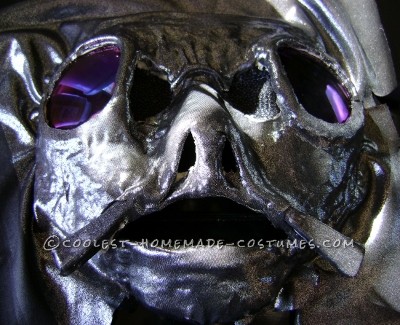