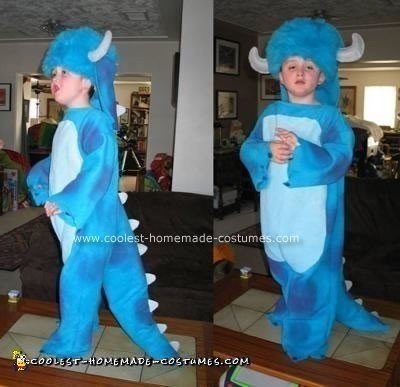 For Halloween 2008, our sons chose “Monsters, Inc.” for their costumes.

Our older son (age 5) had a Sully from Monsters, Inc. Costume. We live in Phoenix so we were a little nervous about making a furry costume (could be VERY uncomfortable for him if the night was warm) so I chose a light-weight fleece fabric. I found a great color of blue that matched Sully’s fur and looked a little bit furry. I sewed a very simple jumpsuit that spanned from his shoulders to his toes.
(Cost: About $15)

For the belly, I used the same type of fleece but in a lighter shade of blue. I simply cut out a giant oval and hot-glued it to the darker blue fleece jumpsuit.
(Cost: About $3)

I left part of the back of the jumpsuit open (with a snap closure at the top of the neck) so he could ventilate (it ended up being a warm Halloween last year). He has a blue t-shirt that matched the fabric perfectly so he wore that underneath.

I made the length about 6? too long at the ends of the jumpsuit (bottom of the legs and sleeves), so that I could simply cut out triangles to resemble toes and fingers. I painted the tips with a black Sharpie pen to resemble toenails and fingernails. They dangled over his shoes and hands and looked great.

I made the tail using the same fleece fabric as the jumpsuit, sewn into a simple tail design that just touched the floor when he stood straight, and filled it with batting. I attached it to his jumpsuit with simple whip-stitching and ironed a dark blue patch underneath the tip of the tail (so it wouldn’t fray as he walked along).

For his back spines, I cut out little ½ moon-shaped pieces of gray felt, hot-glued 2 pieces together at a time (back-to-back), and hot-glued them directly to the fleece fabric. The double-stiffness helped them stand straight up. The spines went from his neck all the way down the tail, spaced about every 6′ or so.
(Cost for felt: About $1)

For his mask, we didn’t want to cover our son’s face with fabric (again, too hot and uncomfortable) so we used a “Grand Poobah” hat we had from an old Flintstones costume and it worked perfectly! It was furry, the right shade of blue, and already had horns. They were yellow so I simply covered them with gray felt. I cut a large rectangle of the fleece fabric and I whip-stitched it to the hat so it covered his neck and MOST of the ventilation slit I left on the jumpsuit. I glued some spines on it as well.

My husband then spray painted purple circles on the jumpsuit, tail, and neck portion of the hat to resemble Sully?s spots.

I painted on his nose with blue face paint. He was adorable!