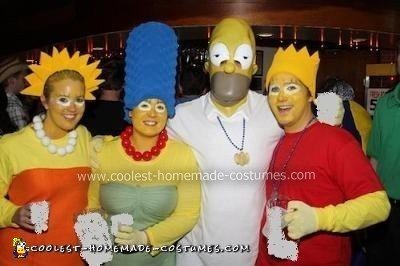 We are all big Simpsons fans, and while looking around for costumes at a store we found a Homer mask and decided it was a must do!

Making Homer was pretty easy – we found the mask at Target, all the other clothes were pretty easy and he already had most of them. We did attach a pillow to his body to make him appear fatter.

Marge’s, Lisa’s, and Bart’s Hair all made out of a foam eggshell mattress pad. To make Marge’s, we just measured her head, and cut a rectangle out of the foam and hand sewed it together. We cut a circle piece for the top and sewed that on also. We bought blue spray paint to paint the hair.

Lisa’s hair was formed around a thick girls headband. We laid the headband on the foam and drew the shape we wanted and cut it. We hot glued the foam to the headband. Used yellow spray paint to paint it.

Bart’s hair is the same concept as Marge’s. We cut out a rectangle but with spikes on the top, sewed it together, and spray painted it. It does not have a top.

Lisa’s and Marge’s necklaces were made out of ping pong balls. We used a thick needle to pole holes in the sides, and strung thread through them. We then spray painted them red. Lisa’s didn’t need to be painted because her necklace is white.

All the clothes we either had in our own closet or we had to buy them. Lisa’s dress was made out of cheaper fabric we bought and sewed it together. Lisa and Marge both had yellow tights on (not visible). We used yellow knit gloves on our hands. We also bought yellow face paint at an Halloween store to paint our faces.

Overall, this Simpsons Group Costume did not take that long to make. The hair was obviously the most time consuming. And the only money it cost was to buy the foam mattress and spray paint, and whatever clothes we didn’t already have. 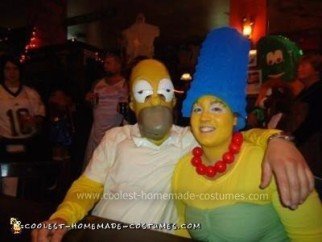 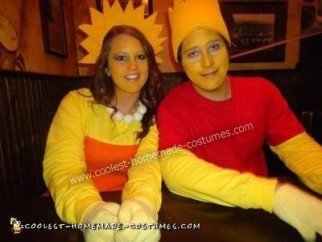