I went as a Reptile Man costume. I came up with the idea because I wanted to do something different and kind of scary that could pass for cinema quality, only without the cost.

I made the costume starting with bendable plumber’s pipes. I inserted smaller and smaller pieces into each other to create the tail. Next, I took clay and created all the horns for the whole costume, and the tail. I glued these to back boards and the tail, and then painted them to look pretty realistic.

Next, I took the tail and bolted a belt to it, so I could actually slip it under a pair of biker shorts. The end product with the tail looked pretty good — you could not tell how it was attached.

Then I shaved my head, taped down my ears, taped on all the body horns, and covered everything in liquid latex. This ensures that the tape edges can’t be seen and makes the paint adhere better. Once the horns were all in place, the tail attached, and a rough covering of paint was in place, I started on my face. I cut the end off of some child’s fishnet tights, and pulled it over my head, cutting out the area in the front for my face. This created a “scale head and neck” look. I added the horns to my head, and then glued a facial prosthetic mask. I bought this, but heavily modified it, adding horns, cutting off the neck, and resizing it.

Once that was in place, I used lots of latex to merge the area where it attached to my head so it was harder to tell that it was glued on. I added the contacts and teeth, which were also purchased online. I then put on a pair of fishnet tights, a fishnet shirt, and some fishnet gloves, which were all also painted to fade out the edges and look more reptilian.

The feet and hands were also made by me, mostly using clay, glue, and duct tape. The finally product was fairly comfortable and I think it looks pretty good too.

By the way — I was the “gargoyle” submitted last year… It’s great to see it up on the site!

Take care and thanks again! 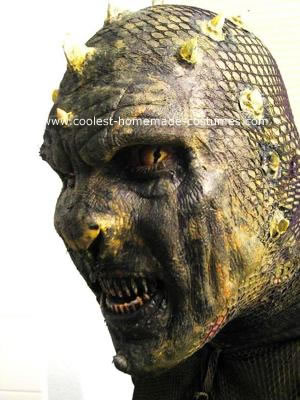 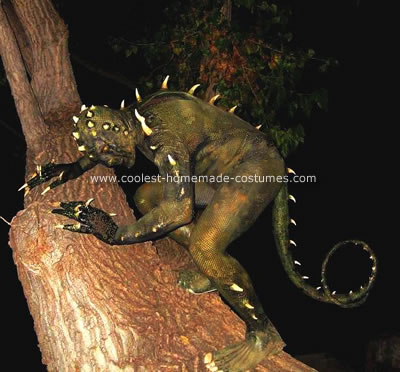 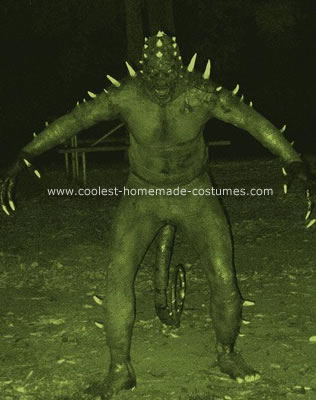