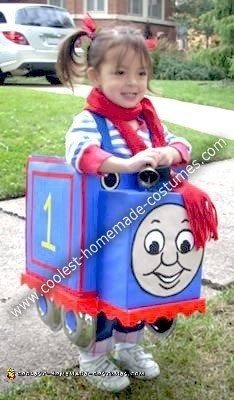 Since my 3-year-old daughter is just wild over Thomas and Friends, I created just the costume for her Halloween. A trip to the Dollar store yielded three sheets of poster board (two blue, one yellow), and some red teacher’s bulletin board border strips of paper. After cutting the blue poster board down to size with scissors, I then hot glued them to the two boxes covering them both inside and outside. I made the larger box sturdy by bracing it with four cardboard triangles wedged into and hot glued to the corners. I covered those triangles in yellow poster board. I used hot glue to stick the two boxes together.

I went to Menard’s and bought the smallest set of nuts and bolts I could find and used those to bolt the two boxes together. Using a box cutter knife, I cut a hole through the two boxes so you can access the inside of the smaller “face” box.

Wheels and Wheel Base: I hot glued metal electric stove top drip pan covers to cardboard. I then cut out the wheel shapes using a box cutter so that only the wheels can be seen. I fashioned a 90 degree angle edge with the cardboard so it could be flush and flat against the bottom of the box, letting the wheels hang down suspended. Using the red teacher’s bulletin board border, I folded it it and glued that onto the wheel base/ I then used hot glue to glue the wheel mechanism to the engine box, and fastened them together with a metal “L” shaped bracket. Since it needed more reinforcement, I found lightweight plastic cabinet safety locks for baby proofing and used those as “L” shaped brackets as well.

My daughter pointed out that Thomas’ wheels are blue, so I cut out circles of cardboard and blue poster board and glued those into place as hubcaps. I took a cardboard wrapping paper tube cut in half, covered it in green electrical tape and glued them to the wheels as axles.

Face and Circles: On a sheet on gray construction paper, I drew Thomas’ face in pencil. I outlined that with a black poster paint marker so the colors would really pop. Using a bow compass, I drew a circle to complete the face. I used regular white printer paper for the whites of the eyes and the smile of the mouth and glued those on also. I glued the face onto the small box with hot glue. I again used the bow compass to draw circles onto the yellow poster board, cut those out with scissors, and used the black poster paint marker to color in the black parts of the circles, before hot gluing those onto the engine box.

Buffers: Using Walgreen’s brand Pediatric Drink bottle caps, I used the same black marker to paint them black and found perfectly sized red reflectors to fit inside. I glued these on the back of the engine box to serve the dual role as buffers and high visibility safety reflectors.

Suspenders: I ordered a pair of blue toddler size suspenders from www.suspenders-online.com and sewed Velcro onto the interior portion of the straps. I sewed more Velcro onto my daughter’s shirt. I also put Velcro on the interior front of the engine box, and matched the strips up to her shirt sewing more Velcro on there as well. So, essentially the child was Velcroed to the box so she could easily move around.

Whistles and Bells: I made her a bell by getting one from a Christmas ornament and hot gluing it to a clothespin covered in electrical tape. She also had a whistle to carry around and use too.

Smoke Stack: I cut a neoprene bottle insulator in half, and cut a circle in the top of the face box and glued it into place. The smoke stack then served as a chimney to drop the Halloween candy through and the box became her trick or treating goodie bag.