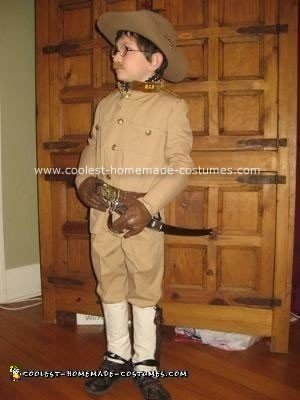 My 8 year old has a history of creative costumes, thanks to the sewing skills of his grandmother. In the past he has been Max from Where the Wild Things Are, a British redcoat, and Napoleon, to name a few. This year, we decided to explore his interest in the presidents – especially T.R. – since we had the chance to visit his Long Island home recently. So we made him a Homemade Teddy Roosevelt Costume.

We ordered an out of print soldier costume pattern, and adapted it to our purposes. The trickiest bit was tracking down the appropriate insignia, and cheap round glasses sized to fit a kid (thanks Build a Bear!). But success has been achieved, and he is ready to storm San Juan Hill! You can’t see it in the pictures, but if he takes off the jacket he is wearing the appropriate blue flannel shirt and suspenders for those informal moments between battles!

The gaiters were created using the boot part of the pattern from a previous costume – Napoleon – which came with attached boots. I could only find white suspenders, but dunking them in a pot of tea for a few hours created the appropriate shade of khaki.

I could not find gauntlet style gloves for a his size that were under $60 at motorcycle stores, so I covered poster board with fabric, made a cone, and hot glued that to an old pair of leather gloves.

I suppose when he wears it to school, he will have to leave the gun at home! Now, if I can just figure out a saddle for our greyhound.