I dressed in overalls, plaid flannel shirt, and work boots. I used white makeup with some pieces of Kleenex stuck in it. My “beard” was part of a Halloween wig with some white paint lightly sprayed on it. My “companion” was dressed similarly. His body was started with a pieces of PVC to make him stand erect and give him shoulders. I dressed the PVC, including a skin-colored shirt that I used for his head.

Then I put a half-mask on the top portion of his face and added the beard and hat. His shoes were slippers, to be lightweight, simply safety-pinned on the bottom of the pants. His hands were plastic Halloween hands. The “banjos” were pie plates with yardstick handles. Last, I sewed some fake Halloween teeth in his mouth and put my hand in his head, so that I could make his mouth move when we “sang” to a CD from the movie. His overalls were simply safety-pinned to mine. The leg pinned to mine moved with mine, as the PVC was in his other leg.

The judges kept wanting to put me in the “duo” category, but I was a “single.” 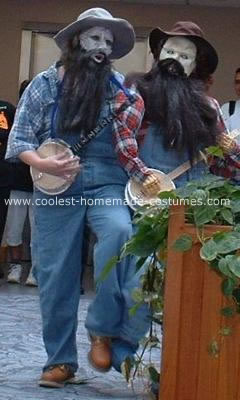