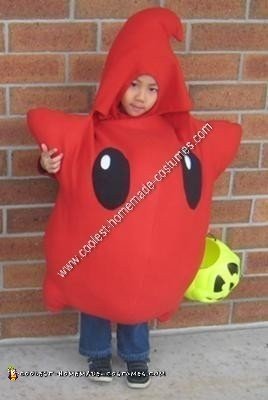 My sons are big fans of the Super Mario Games. They’ve been watching me play Super Mario Galaxy for a while. One of the “characters” in the game is a Luma. It’s a star like creature, and actually there are many of them in a variety of colors. My son wanted to be a red Luma for Halloween, so I set out to figure a way to make this homemade Red Luma Halloween costume idea.

I found a tutorial that came with an online Luma Plushie pattern for making a Luma plushie. I made a few of the plushies just to practice. Then I took the pattern, figured out approximately how big it needed to be for the costume to cover my son’s head to his knees.

Since the pattern was a PDF, I used an LCD projector and adjusted the distance to the wall, until I got the right size. Then, I took some flip chart paper, and taped it to the wall so I could trace the pattern. I cut out my “life sized” pattern and used it to cut out my red fleece.

The outer body of the Luma was pretty easy. The difficult part was figuring out how to take a plush doll and modify it to make it a costume. I started by making a red shirt that would act as a liner to keep the batting away from my son’s body. I figured that I would make a hoodie out of the top of the costume, and cut out a hole for his face. I faked my way with sewing the shirt to the inside of the body, and then I had to cut out the front of the hood, cut out the hole for his face, and make a pillow that would be sewn into the hood so the top kept it’s shape.

We got a lot of positive comments and stares on Halloween. Some people understandably so confused him with a Pokemon. 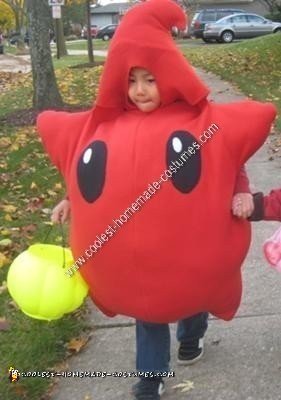 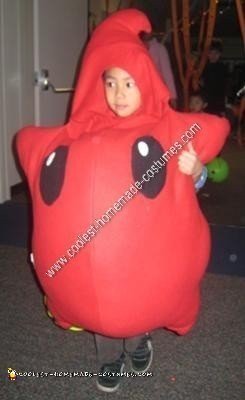