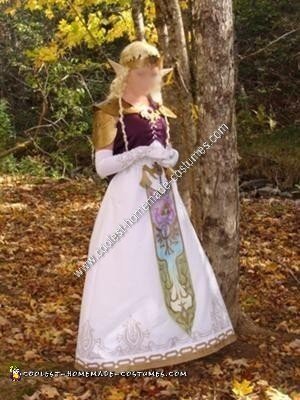 My daughter always starts thinking about what she would like to be for Halloween by January! This year she decided she wanted to be the Twilight Princess version of Princess Zelda. I started researching in June and getting some rough ideas of how we wanted the finished costume to look. The major factor would be cost – I didn’t want to spend more than $20 or so for the entire costume (it’s only worn for one night after all!).

The main gown part was made from a white cotton bed sheet I found at a thrift store for $4. I made up a pattern as I went, and the gown looked a lot like a cotton nightgown when I was finished. I painted all of the trim on to the dress by hand using a photo of Zelda as a reference. It is hard to tell in the photo, but the paint is gold and it had some sparkle to it.

The purple vest was made from a satin table runner I also found at a thrift store for $3. Again, I just made up a pattern as I went. I made hand sewn grommets for the lacing for the front of the vest (which die-hard fans will say is not authentic to the costume, but the fabric was too stiff to pull on and off over my daughter’s head, so we had to make it more a vest and less a pullover style garment) and we just used a long white shoelace to lace it up!

The Hyrulian banner that hangs down the front of the dress was made from an old pillow case and colored in with pencil crayons based on the photo of Zelda. I also added gold paint for the golden colored areas.

The armor, crown and waist decorations were all made from fun foam (3 sheets for a dollar at the dollar store!). I found a tutorial on line that showed how to make realistic looking armor by heating and bending fun foam, adding fabric backing and lots of layers of paint! We joined most of the armor together using copper wire (left over from another craft project) bent into rings. We thought it turned out pretty cool! The “jewels” are all little plastic gems from the dollar store. The ears are also fun foam – they just popped on over her on ears and we stuck a little band aid on them to hold them in place all evening!

The wig we bought for $5 and gave it a little makeover to look more Zelda-ish! The gloves were $2 and we just painted the design on to them with the same gold paint. My daughter just wore her black suede boots with it.

I really had a great time making this costume & my daughter loves it! I hope you enjoy it too! (I am sorry I blurred her face in the picture, but this is the internet you know!)