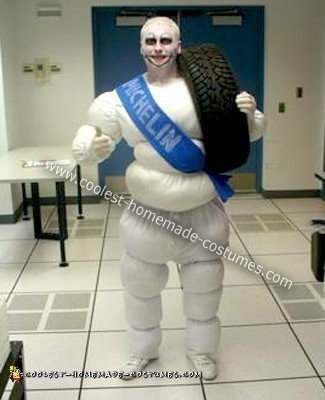 This Homemade Michelin Man Costume is a GUARANTEED crowd pleaser!

Someone at work actually gave me this idea on the Monday before Halloween. They usually allow dress up at work, so I ended up making this from idea to product from Monday to Friday. On Tuesday I looked online to see how I could create this costume. When it was in my head, I just kept thinking of using inflatable pool tubes and somehow painting them white.

When I looked online and saw pictures of the Michelin Man, I realized a much easier and better way of creating the costume.

I went shopping. All I needed were oversized pants (I found scrubs worked great!) and shirt. I found 3X for both and then I bought some padding from Wal-mart. I also bough some some fabric to make the sash and white ribbon to tie around my body to make the sections. White hair spray, makeup, gloves, and some $3 shoes completed the costume.

However, I still needed a tire for the Michelin Man costume! With it being the end of October up here in Central NY, it was kind of hard to find what I was originally looking for (a pool tube that is supposed to resemble a tire). Since I could not find any of those anywhere, I decided to go with the real thing. I had a spare snow tire that I was going to be putting on my car in a few weeks. That was probably the best thing I could have done!

I received so many comments on the costume and that I was carrying around a real tire! I turned heads everywhere I went! But I guess since I was the only one to dress up at work (out of about 150 on our shift) then I would be the topic of conversation.

The picture included is how I looked on Halloween Eve. I did a MUCH better job on the Michelin Man costume makeup on Halloween Night and I looked a lot less “Joker-ish.” Unfortunately I do not have any pictures to show you of that night.