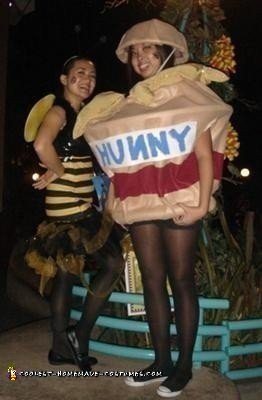 I wanted to hand make a unique costume with my cousin. We call each other “honey” because we are really close, so I decided to have her dress up as a bee and me as a honey pot.

I drew out my design first on paper similar to the Winnie the Pooh honey pot, and asked some friends for ideas for what the costume had to be made out of. I was set on using a hula hoop for the hoops, because it is stable and holds it shape, yet is light. But the store only had one size hula hoop, and apparently hula hoops aren’t in season in october. So my friend suggested using pipe insulation which is made out of black foam and is bendable into a circle and is lightweight.

For the biggest circle of the frame I used the hula hoop, and for the bottom and top circles I used the pipe insulation. I bought felt by the yard from the fabric store, in the tan, red, and white colors that I wanted. I made the frame using duct tape and attached all three hoops together. Then the hardest part was to wrap the fabric around the frame. I pinned the fabric on and then went back to hot glue the fabric together. You have to be careful not to let too much of the hot glue touch the foam, because I found out that it melts the foam.

After that, then it was the easy part of decorating the pot. I glued the strip of red onto the pot and then painted “hunny” on a piece of white felt and glued that on. I cut arm holes into the sides and felt doesn’t fray so I didn’t have to sew it.

For the dripping honey, I cut wavy sequin fabric to make it look like it was actually dripping. I cut two pieces of each like I was making a pillow and I glued the wrong sides of the edges together, then flipped it right side out and stuffed it with pillow stuffing and glued them onto my costume. The honey for where my head comes out was glued on the inside and I simply cut a hole for my head, and this fabric is stretchy and doesn’t fray also.

I made the lid (aka hat) of the pot out of a large plastic bowl that I found at a 99 cents store. I just covered it with felt using a hot glue gun and made a little foam ball to put on top. I attached an elastic string to keep it from falling.

In retrospect, I would make the lid more form fitting because it kept falling off when I wore it. Also, since my arms are short compared to the first hoop I couldn’t feed myself or touch any area of my head because my arms wouldn’t reach. However, this costume was very warm since it was made of felt and it was easy to get in and out because I could just lift it up and over my head.