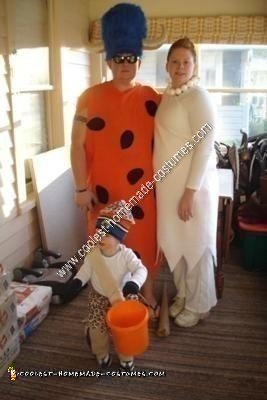 Our family costumes include myself Kattie as Wilma, my husband Brian as Fred and our son Olin as Bamm-Bamm… Since we don’t have a little girl we could dress as Pebbles we decided we were “babysitting for the Rubbles” that night. I had a blast making these homemade Flintstones family Halloween costume ideas.

Fred’s was easy to do, I just measured and made him a sac and then cut black felt spots out and ironed them on. His tie we decided to go with flames instead of the original blue, because Brian is a firefighter. We purchased the Water Buffalo hat to add to the costume.

My costume was a little more difficult do to the curves. But again is was relatively simple. I measured myself, drew out the outline I wanted pinned and tried it on. Once it was stitched, I tried it on again and had to make a few adjustments. The necklace, earrings, bracelet and ring were all made from Styrofoam balls and fishing line.

Olin’s costume was fun. I wanted something to keep him warm and fun. The material was measured and cut, it was difficult to try it on him as I went, due to him being a year old and on the go. Instead of stitching his all together, I used buttons and cut holes for them to go into for ease of getting it on and off him. The bone was made out of Styrofoam and shaped using tools by Brian.

We had a blast while out trick-or-treating, we even had random people taking our pictures. 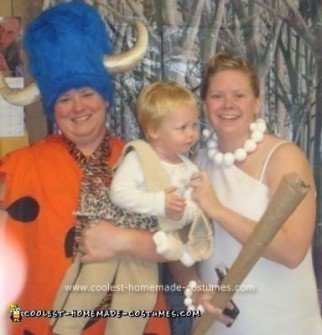