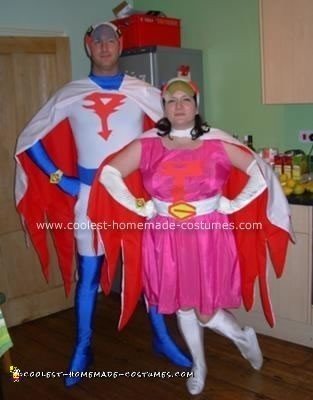 Battle of The Planets Costumes: Princess and Mark

We were invited to a retro cartoon Birthday Party in which we decided to go as BOTP’S characters. These Homemade Battle of the Planets Costumes were all made by me. The costume was mainly made from Lycra, with cotton fabric for the capes and plastic for the helmets.

Marks Costume was based on a white long sleeved T-shirt and Shorts. I took in darts on both the T-shirt and shorts to make that figure hugging look without the indecent element. You could make an all in-one Lycra leotard if you really want!
The next part was making the Blue parts to his costume which were Blue Lycra boots, Blue Lycra Gloves and a Blue neck piece (like a turtle neck).

The Gloves I drew round my husband’s hands and arms, and marked where they should overlap the T-shirt arms. Then I sewed all the long seams by machine and the fingers I hand sewed. I put a band of elastic at the tops of the gloves to keep them up and these went over the T-shirt sleeves so it looked like one garment. The Logo was sewn on to the t-shirt at the end in funky foam.

Boots: The boots for both costumes were made the same way. I drew around the shapes of our legs (for me I flattened out a pair of knee high boots and traced that), it involved a few pin pricks on my husband (ouch). I essentially made a Lycra sock for each boot and then bought a cheap pair of Plimsolls which I put inside the socks to make a boot. I tightened them up with a few more darts so the effect when you put them on was an all in one boot. Keeping them up was a problem so I sewed elastic tops onto them.

Princess Dress: For my dress I took a dress which I had of similar shape and traced around it (I have no patterns or real experience so I made most of this up). I machine sewed the seams for the dress but it had no lining or anything fancy. The Logo was sewn on at the end in funky foam. I already owned a pair of white elbow gloves.

Capes: The capes were perhaps the most painstaking part of the costume and took me a couple of days to make. I drew out the pattern on newspaper first for each cape (which was really trial and error) to get the hang of the feathers right. I actually cut them long and droopy feathers, as cutting them in a fan shape wouldn’t make them look right when you put them on. I then cut them out in white and then red fabric and sewed them together and turned them inside out (A bit like a giant pair of gloves).

To finish them I made a Lycra turtleneck (just the neck part) for each of us which I sewed the wings onto. This meant we could walk around and the wings stayed put but also meant we could do some dramatic swooping and reinacting the title sequence when they all land on the side of a ship.

The Belts and wrist watches: the belts were made by making a cardboard belt for each of us and covering it in the corresponding Lycra. I put double rows of hooks and eyes on the inside so the ends overlapped. I then covered the join with the funky foam G-Force logo. The wrist watches were made again with funky foam logos and were actually a piece of white cardboard cut into a strap and secured with sticky fixers.

Helmets: The visor helmets were really the lynch pin of the costume. As this was for a party we wanted something lightweight but gave the illusion of a crash helmet. After scouring the internet for child size crash helmets etc, I came up with the concept after we were discussing Papier Mache. My husband suggested getting it round by using a child’s football instead of a balloon so that it looked smoother, this gave me the idea maybe we just used a foot ball! I burst a couple of kids footballs (we bought these for the costume, and may I add no kids were upset during the making of this costume) and turned them inside out. This meant the white shiny side was outwards and I then cut away a curved edge so that it fitted around our faces but we could get them on.

The bird features were added in funky foam which we placed with sticky fixers and then super-glued on. The visor again was a bit of inspiration; I used 2 A4 plastic document wallets in the corresponding colours and cut out the shapes for a Duck beak, and a Hawk. I cut a V out of the edge that attached to the helmet so that it curved correctly; the Hawk was a bit more complicated as I had to make the front curve down. I actually folded a seam about 2/3 of the way down the middle of the front and the last 3rd I cut open and cut a V out of. I then rejoined the 2 edges at the point and sealed the seam back with sellotape. This made the point of the visor beak curve downwards like Mark’s hawk does.

These Homemade Battle of the Planets Costumes took about 3 weeks to make, including finishing all the bits of material whilst still working full time.

2 thoughts on “Coolest Homemade Battle of the Planets Costumes”