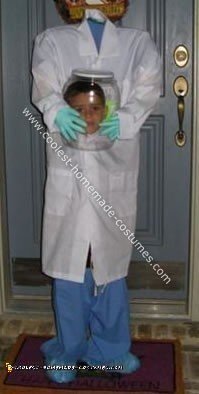 This Headless Doctor Halloween costume was based on Headless 08 found on Coolest Homemade Costumes.com. We decided to expand on that theme to create a headless doctor carrying a head in a jar.

1) The torso form: Cut the 13”W X 3”D cardboard box to about 12”L. (I cut away a large part of the front so I could get in to adjust the hangers that would be coming through for the arms and to make it lighter.) Use this to create the shoulders and cut some small slits coming out of the sides to feed the straightened hangers through to create the arms. Install the hangers and wrap the 9” strip of cardboard in a cylinder around the top of the hanger to create the upper arm. Duct tape it to the “shoulder”. Next, wrap the 8” piece of cardboard in a smaller cylinder below the upper arm piece and tape it in place at an angle to create the elbow and forearm. Do this on both sides. Twist the hangers together once you get the length right and tape to the inside of the torso box. ***Note: Dress you torso before you finish taping the second arm in place, or it’s hard to get the lab coat on. Cut the scrub shirt about halfway up so you can access the inside of the shoulder box. Tape the wooden dowels to the inside edges of the box. Tape the 4” piece of cardboard in a neck size cylinder and tape it to the top of the box. Then, take a stack of a few sheets of tissue paper folded in half (so it’s long and narrow) and cut a half moon shape at the fold to create a whole larger than the neck. You will then place this over the neck and shoulders (like a dry-cleaners hanger) to give the shoulders some shape. Stuff a piece of tissue paper in the neck.

2) The hands: Carefully stuff the gloves with pillow stuffing. I used a chopstick to poke the stuffing into the fingers. I also put some thin wire in the fingers (bent to prevent tearing the gloves) so that I could shape the fingers. Bend the ends of the wire hanger arms to the appropriate length and carefully push them into the gloves. You can then fit the tops of the gloves around the cardboard forearm wrists.

3) The jar: Using a plastic pretzel container, cut away a little less than half of the back, leaving the top in tact. Cut out most of the bottom leaving about a ¾” lip. (We used a dremel tool for this.) Cut a big circle out of the lid (there is a ridge you can use as a guide) and glue a piece of T-shirt material to the inside edges. If you put it back on the container while it’s wet, you can stretch it out and then cut around the edges. I poked a tiny little hole on each side about midway down the back of the container mask and sewed some clear nylon thread across the back to hold it on the head.

4) Pants: I cut off and hemmed the scrubs to fit my 7-year-old son’s height. The drawstring made them easy to work with for the waist.

5) Shoe covers: I used some heavy weight cardboard to shape the shoes and placed a piece in the bottom of the shoe as well. I then stuffed it with tissue paper leaving enough room for him to get his crocs in.

6) Put it on: First put the pants on. We used a canvas tool belt that had two pockets and tied it on so the pockets were in the back. We then just slid the dowels into the pockets and it was completely stable. The head sticks out through a couple of open buttons on the lab coat. Place the jar over the head and adjust the arms and fingers around the jar. Put on the shoes. We followed the suggestion to use a green glow stick to create a formaldehyde effect. It looked really cool, but is difficult to capture on film. (The only thing I’d do differently on that is possibly get the necklace glow stick and attach it to the container because the regular glow stick kept falling out.)

This costume was a huge hit! 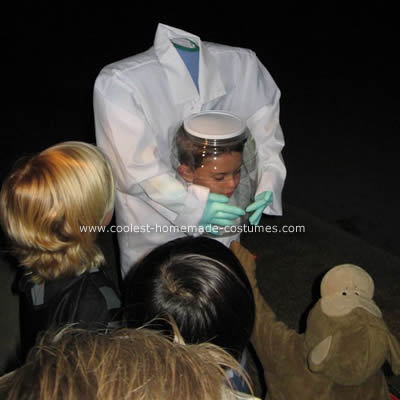 Cool Illusion Costume Idea for a Boy: Doctor with his Head in a Jar!