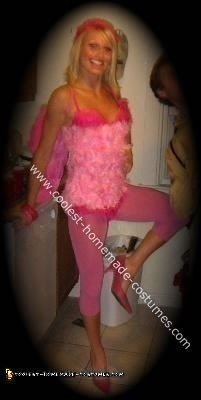 Firstly for this flamingo costume, I covered a tube top (nylon/spandex blend) in light pink feathers using a mix of fabric glue and super glue (60/40 ratio). I had to do 2 layers to cover the whole shirt well enough to look like a bird.

Next, I cut small wings out of cardboard from shoe boxes and covered them with bright pink feathers. I stapled old pink bra straps to the center of the back of the wings, adjusting them to the shortest bra strap setting in order to create a loop for my arms to go through. (Another alternative is to use very thin elastic instead of the bra straps.) Make sure to use 4-5 staples, stapling them as hard as you can. Next, I took a one inch fabric headband and glued bright pink feathers to it.

I completed my costume by wearing pink tights, heels, and bracelets.

TIP: Glue makes shirt/underwear stiff, so they lose their original stretchiness once it dries. I would recommend putting a zipper in the shirt because I had to have a friend pull it over my arms and head in order to get it on.

In addition to my costume, I wore specific makeup from MAC. First, I applied “Fafi Blush” to my eyelids and into my crease to get the bright pink effect. Then, I added a glitter eye shadow “Helium” to my brow, followed by “Blacktrack Fluidline” eyeliner. Next, I glued on fake eyelashes for a more dramatic eye effect, which can be purchased at any MAC store for about $15. They are also sold at drug stores. Mascara is optional. I wore “Pink Poodle Lipgloss” on my lips, which ended up being my favorite part of my makeup. Apply liberally for pictures.