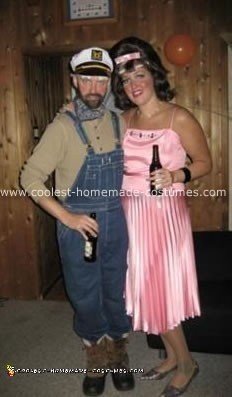 These Captain Carl and Miss Yvonne Costumes from Pee Wee’s Playhouse was from Halloween 2007 – my boyfriend and I went as Captain Carl and Miss Yvonne from Pee Wee’s Playhouse. His costume was super easy because he borrowed most of the clothes from his Dad. We used some cotton for the eyebrows and painted on the five o’clock shadow. All he needed to buy was the captain’s hat.

I found this dress on clearance at a dress store, and embellished it with some big rhinestones. Then I sprayed glue over a pair of pumps and dipped them in glitter. It went over really well. A “Pee Wee” showed up to the party later in the night, but we didn’t get a picture with him.