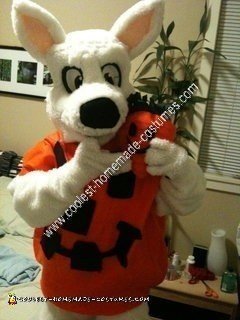 My Halloween costume this year is from the Disney animation movie “Bolt.” I had this Bolt in a Pumpkin DIY Halloween Costume Idea. I started off making the head with white foam. I shaped the foam into a dog head and added some features such as ears, nose and a mouth. IMPORTANT NOTE is to be careful when you hot glue the pieces together. I marked where my eyes are and cut out circles after I used craft foam to make the eyes. To see out of the eyes I bought nylons from the Dollar store and glued it over the craft foam.

In this costume I used black nylon. Later I used hot glue to attach the fabric over the foam to complete the headpiece. For the body I wore a white hoody underneath and cut out a pumpkin shape design on an orange piece of fabric and sewed the two pieces together to make the upper body.

For the arms and paws I drew and cut out a pattern, then sewed the two pieces of fabric together. The pattern I used fits my arm size and my hands. You can make the arms and paws wider if you like or more tight fitted. For the paw prints I just used left over black felt and sewed them on to the gloves.

As for the legs I wore white pants and sewed some soft fabric over to match the overall feature. I also made Mr. Carrot for those who watched Bolt you would know. I started off by cutting out a carrot shape on a orange piece of felt then cut it out and sewed the two pieces together. Remember to sew from the inside then pull the fabric out so the seams are covered. I used a green piece of fabric and cut out leaf shapes and sewed that onto the carrot.

For the eyes and mouth I used the left over black felt and hot glued it on the carrot. You can add some carrot features on the orange fabric by using a brown marker and draw some lines to make it look for realistic. 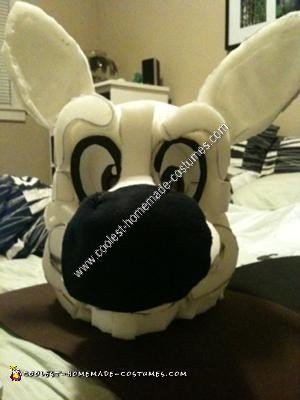 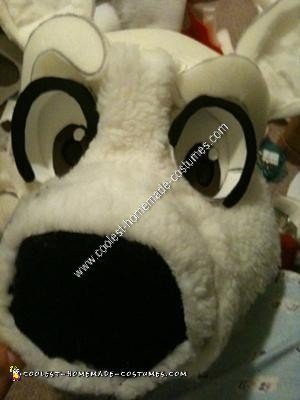