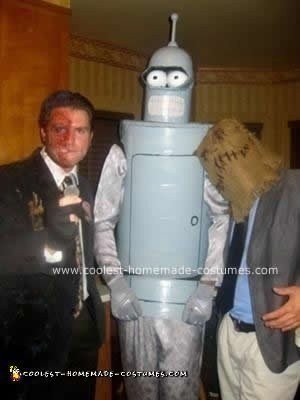 For Halloween I decided to make a Homemade Binder Costume from Futurama. It was one of the more expensive costumes for me to make but it was more than worth it and all the trips to home depot for supplies!

The body is made of a cement pillar casting from home depot, which I cut arm holes in and customize in size somewhat. The top I used a piece of particle board cut in a circle with an inner circle cut for my head/neck to go through. Inside I should have made a harness to hold all this weight (about 20lbs or so total, but I ran out of time so it was all sitting on my shoulders which I did think was such a bad thing until I was wearing it for 4hrs. That was the easy part tho, the helmet was the time consumer.

The helmet is made of a small trash can with the seesaw swivel top that I glued shut with poxy and then sanded smooth. After which I made the eye visor with a piece of cardboard that I shaped to what I wanted then put popsicle sticks around to make it sturdy then I poxyed to the garbage can. I used some plaster to get the visor to have a smooth transition to the helmet. I sprayed the inside of the visor with black glossy primer then took two plastic domes I got from a ball toy at Target for the eyes which I spray painted white then poxyed with a clear drying solution to the inside of the visor.

For the mouth I had cut a big oval out then proceeded to make the top antenna portion which was done by taking the top portion of a spray paint can (the little dome that the spray nozzle is affixed to) which I then cut off with a rotozip power tool and attached to the top of the helmet and took off the spray nozzle which left a nice stand for me to take about 5 inches of computer paper and roll it in a small cone shape and put it on then take a wooden ball that you can pick up from Michael’s craft stores and attach it to the top of the paper with some poxy.

At this point it was time to paint it the signature grey. I tried about 5 different greys until I found the correct one which is a primer just the right consistency. I did only 2 coats but one more would have been nice. Once I got it all painted (the body too) I just put some transparent fabric over the mouth with teeth lines (I’m actually looking through the helmet through the mouth). I put a 1 inch wide popsicle stick down the middle of the mouth so my nose didn’t poke through the mouth.

Last but not least was drawing the door opening on the body. I wanted to make a working shelf unit and opening door but time was not on my side. The Homemade Binder Costume ended up being huge considering I’m already 6’3 and the helmet was about a foot over my head. It made going in and out of doorways interesting to say the least.

All in all I spent about $100 and 4 months on the costume but the memories it provided were priceless. 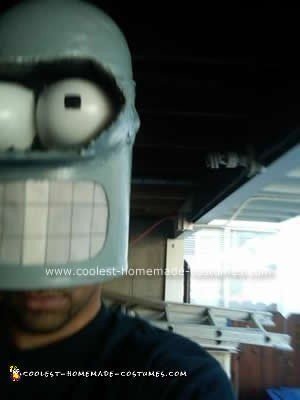 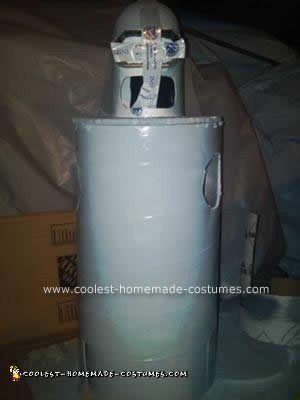 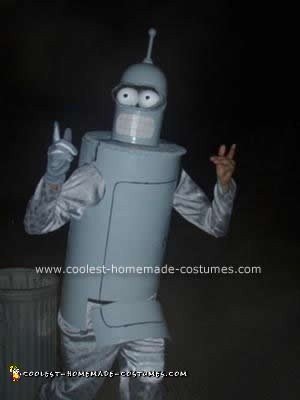