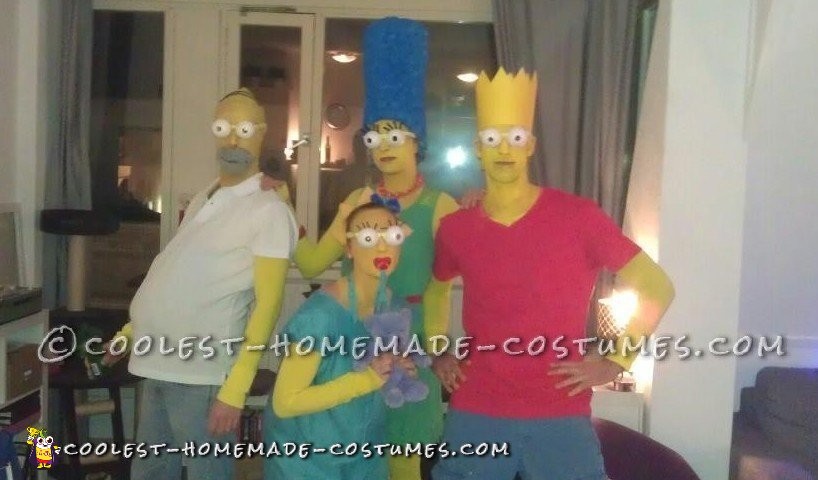 I’m from Holland so my English isn’t that great, I’ll have a try though. When I first thought of creating the Simpsons family I got inspired by all the DIY costumes here. Since DIY is the only way for me, I mixed all the ideas and created my own.

I started with Yellow: Luckily I found a couple of yellow (perfect color) panties in a store in my hometown. And they were on a 75% discount! Of course, who would like to have those panties anyway? I used them for legs of course and cut them for a whole to put our heads trough. Panties are the best because they are tight and look like skin. Then I bought yellow schmink for our face, neck and hands.

The eyes: I bought four cheap glasses with a round monture and I bought four foam balls. I cut all the balls in half and made holes with a knife to have an empty space and of course, holes for looking through. Your room will get messed up with foam! I glued the halves on the glasses and for Marge and maggy I made large lashes with something I don’t know the name of unfortunately. I bought it in a DIY hobby shop (like the foam balls).

For Homer’s head I used a bold hair mask. I used the schmink to paint it yellow and drew some black stripes (hair). For Homer’s head I used a mask for painters protection! I painted it brown, including a black thin line (mouth) and made a hole to breathe and speak through. We used a simple white polo shirt and made with a backpack a big beer-belly. And he wore a jeans.

For Marge I needed big blue hair! I made the base of thick paper / carton (the bag of dog-food) and taped it till it had the right position. I used a lot of cotton balls (pharmaceutical) and glued them on the carton. Finished it with painting it blue (graffiti paint). I already  had a green dress and finished it with red shoes, red belt, red necklace and bracelet.

For Bart we used yellow thick paper/carton. Just made it as a crown, by cutting it at the top like Bart has. Red shirt, blue shorts and a skateboard and it was finished!

For Maggy we bought a summer sleeping bag, cut it on the bottom and just that as a top, to put the head through. We also cut holes for the arms. Her head/crown was made of foam on a hairband, very simple but efficient. and of course we had a pluche bear and a baby suck thing (I don’t what that is called. ;))

We had a lot of attention during Carnival 2013 in the South of the Netherlands. Everybody took pictures of us. It was amazing. I can definitely recommend to DIY this family! Enjoy. 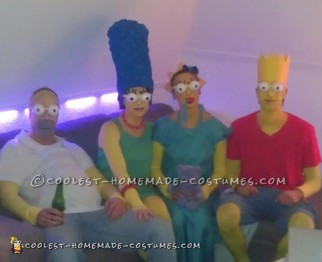