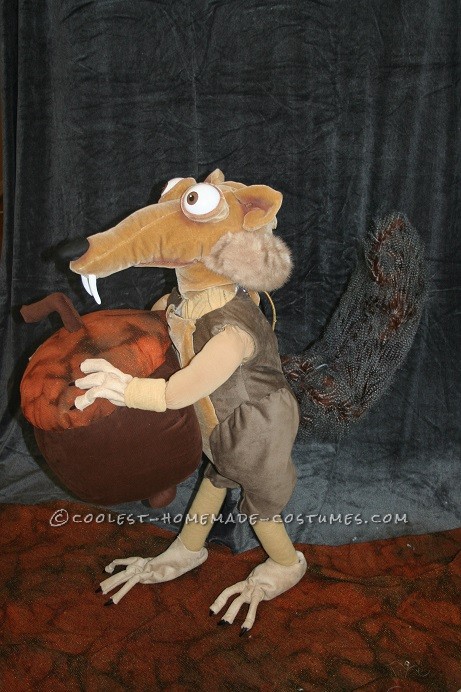 SCRAT! Don’t touch my acorn!! This costume has been on my costume-to-do list fo a couple of years. I finally have a couple of small children to make costumes for. I  figured I better make this costume while I still had little people around to wear it. I started this costume in February this year and have been slowly piecing it together.

Scrat from Ice Age has always been one of my favorite movie characters. I really really wanted to capture his buggy  eyes and expression. He has so many adorable poses that I had a tough time deciding on which look i wanted . My little guys is kind of at rest. He has his acorn so he is not frantic at the moment.

The body was the first part I worked on. I started with some upholstery fabric in a taupe color that i liked. I cut out the body and matching lining. This was assembled with some light stuffing in between the outside and lining to give the body a little more shape.  The back has an opening from the neck down to the waist. There are grommets at the top and a shoe lace that is used to tie the body closed at the back.

To keep the neck are covered ,I wanted to put a long sleeve turtle neck shirt under the bodice piece. There were no turtle necks available at any stores in a tan color. I bought a woman’s  top at a thrift store and cut it up . I made a turtleneck dickie to go around the neck . The other parts of the thrift store shirt were used to make cuts for the gloves and stockings for the legs. There were so many fabrics and textures in use in this costume that I wanted the neck, cuffs and legs to match to pull the look together.

The head piece was the next part I worked on. It was definitely a labor of love. The base of the head is a plush upholstery fabric in a tan. I created the head, eye sockets, and ears out of this fabric. The eye balls are from lids to fabric softener bottle that I spray painted white and then painted the iris and pupils with craft paint. To get the features in the right places, in the right proportion and to be symmetrical was a challenge. I would pin the eyes and ears on over and over until the looked just right. Then I hand sewed them in place.

The nose and the fangs are made from a polymer clay that was formed , baked, then glued in place.

The under layer is made from a stretch bathing suit lining fabric. It is a tan /nude color. I made a pullover long sleeve shirt and pull-on pants with an elastic waistband.

The tail is from a faux fur that I stuffed and wired and then sewed to the base of the bodice. This was a fur that I have had for several years and I felt so fortunate to have because I haven’t seen anything else in the stores that would have worked as well.

The last part of Scrat that I made were the hands and feet. He looked really cute already, but I was going for a more artsy look . I wanted Scrat to have the typical rodents hand which are clawed and balled into fists. Likewise. I wanted his feet to be rodent-like. There was a sherpa fleece at the fabric store that matched the leg color. It was perfect for the hands and feet. It has a lot of body and did not need lining.  I made 3 toed gloves and booties. I then wired and curled the fingers and toes and glued clay claws at the tips. This is where i used the cuffs from the thrift store shirt.

It took me so much longer to make this costume than anything I had worked on lately, That the costume almost didn’t fit our little one by the time it was completed . The little squirt decided to go through a big growth spurt!

Of course I had to add a gigantic acorn to keep Scrat happy. Mine is made from a ball that I made and added a tam-like cap and a stem to.

My husband is used to my costume obsession and rarely makes more than a passing comment, but he absolutely loves, loves ,loves this costume and made me stuff it and put it out among our fall decorations.

Looks like he will be part of our fall decor for years to come! 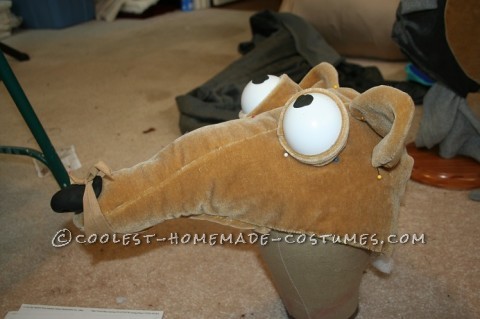 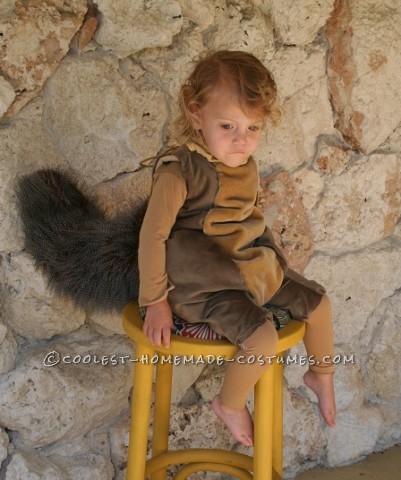 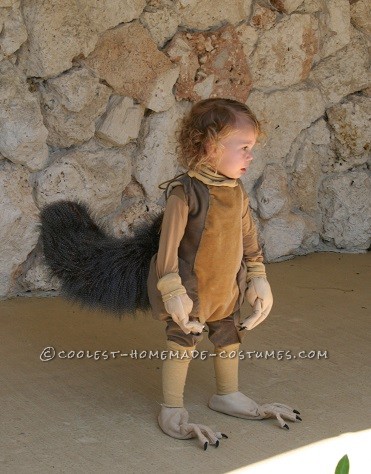