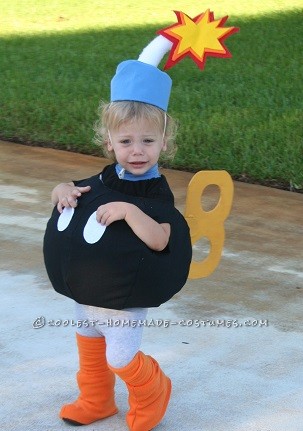 I made several costumes for my toddler in the last 2 months. I did not enter all of them in this contest because it takes a while to do the write ups. Also, some of my favorites aren’t always the popular ones. I did’t initially post this one because I wasn’t sure how it would be received. After posting the costume on another site , someone copied it and entered it in this contest. I am the originato,r however. But since copying is the most sincerest form of flattery, I shouldn’t complain. I just wish people would come up with their own ideas instead of looking over other costume sites and just replicating other’s ideas.  There would be a much wider variety of costumes  that way.)

I actually made a large version of this costume in 2010 for my daughter’s friend. It was so enormously popular with the young adult that I made a toddler version this year!

The base is made from paper mache over a beach ball. After the paper mache dried ,I took out the ball and used it for a pattern to make a black fabric cover to go over the Paper mach ball.

I afixed white felt eyes . The shoe covers and the explosion are crafted from felt ,also. I made the hat from the same black fabrisc as the bomb part. This was a simple costume to make . I hope you enjoy it.

Sorry for the ranting! 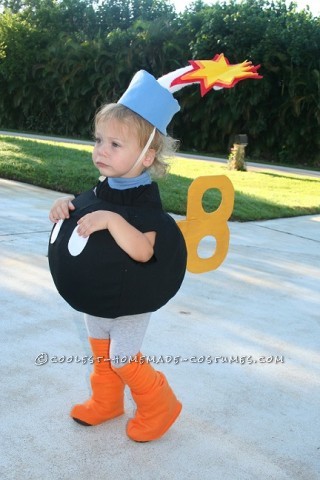