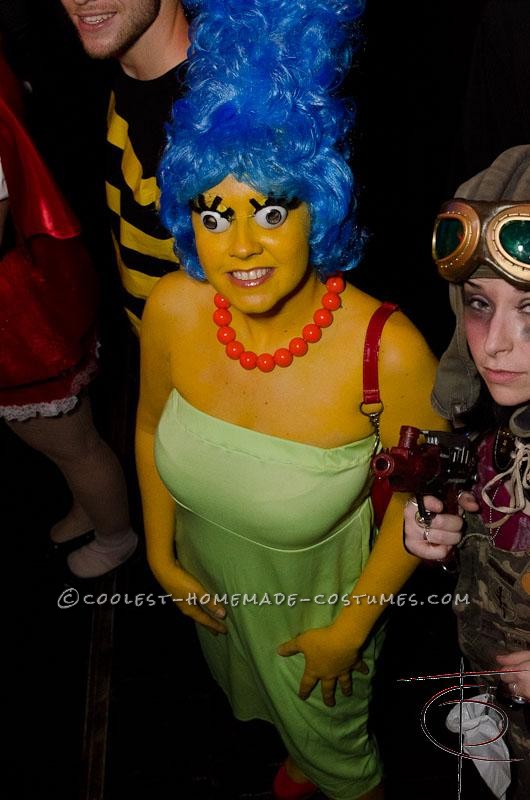 For this Marge Simpson costume, I did what I never do, I bought a pre-made costume, but mainly just for the wig.  Tall blue wigs are not cheap or easy to find, and the costume was $15 on clearance! Can’t beat that!

Now the dress had a stupid sheer portion on the shoulders, which looked stupid.  So I cut that off, sewed in some elastic and made the dress strapless the way it is supposed to be.

Now, to find that body paint that doesn’t come off (I didn’t skimp on that stuff) I had to go to a real costume shop that sells theatrical quality makeup.  I tested quite a few different products before I ended up with this one.  I wish I could tell you what it is called, but honestly I can’t remember.  I know it is a powder that you have to add a liquid to to make it work.  That took about 1.5 hours to cover my whole body (everything not covered by the dress – legs, arms, arm pits, back, face, ears, etc).

For the eyes, I cut a ping pong ball in half and poked holes on either side of both halves which I tied clear elastic wire to. From researching people’s past Simpsons costumes, I noticed the eyes always looked really, really odd. I had to figure out why. It’s because they have no eyelids and most didn’t have eye lashes.  So I drew on a bit of eye lids, and used black pipe cleaners for the eye lashes.  Also, I drew a black circle around the hole in the middle so it looked like an even pupil.  Now, in all honesty these things gave me the biggest headache and I didn’t realize why until after the night was over:  I did not tie the middle section close enough. It was giving me tunnel vision.  So make sure you have the 2 ping pong halves close enough where you have some sort of single sight.

And on top of all that I put the wig and a pair of red heels!  It wasn’t an incredibly complicated costume, but it did take a while to put together, and to put the body makeup on. 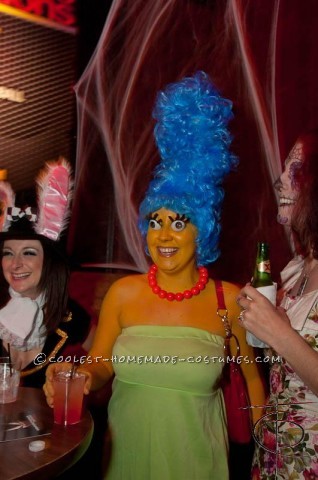 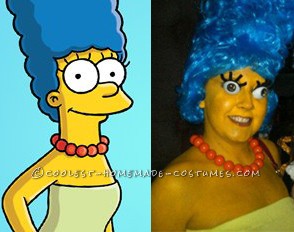