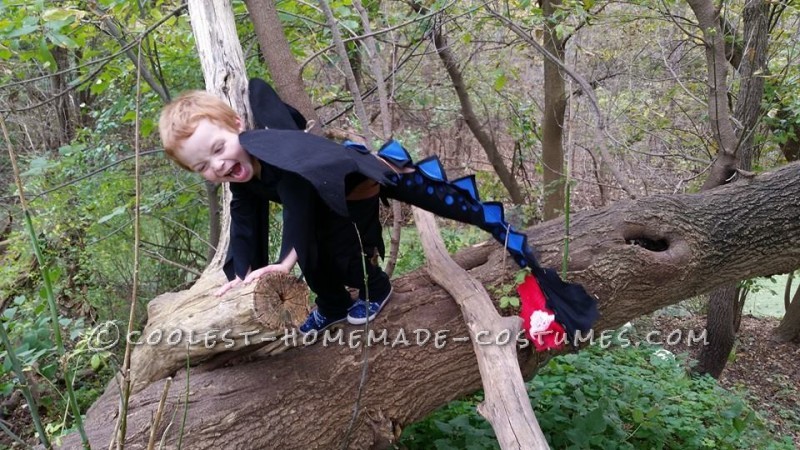 The base was a re-purposed plain witch dress and some tight fitting black pants. We already had blue shoes to match. Making the rest is where it got tricky! I started with some bee wings and smaller bat wings, plus a wire flower for the tail. I covered both sets of wings with black felt using glue, and cut them to match shapes.

I used the same black felt material to build a cone around the wire flower, and then stuffed it with pillow stuffing to make it look like a tail. I used fake leather to build the saddle, simply cutting it (several times) until I got the right shape. A hot glue gun wouldn’t work on this part, so I had to use gorilla glue. I braided hemp cord to add detail to the saddle, and brown paint to emphasize other points. I was able to glue both sets of wings to the saddle rather than each other, so they move more independently. I covered the plain white elastic on the wing straps with brown elastic, again using a glue gun. Using a glue gun was way easier on time and my arthritic hands than sewing would have been. I cut the spikes individually from black and blue felt to make the tail. Once those were painstakingly glued on, I cut spike shapes in tulle and glued that on underneath- a bit harder to tell from the picture. It helped the blue scales (round circles of felt) blend in a bit more and look natural. I also used blue tempera paint to add shading to the center spikes. The tail was probably my least favorite to make. I realized after the fact that I put the red tail fin on the wrong side, so I had to cut it all off and start over. Then they kept drooping, so I glued on pipe cleaners to help them keep their form. It took a lot of trial and error to get them looking right. The tail symbol was done by printing and cutting it out, then painting the stencil with several layers of tempera paint. The best part was watching my sons reaction after each part was different. I worked on it after he went to sleep, so he’d wake up in the morning and try it on with new improvements. Once it was finally done we went to a forest preserve to be a dragon. He got to (pretend) hunt fish, climb trees, and roar like Toothless. He was thrilled! 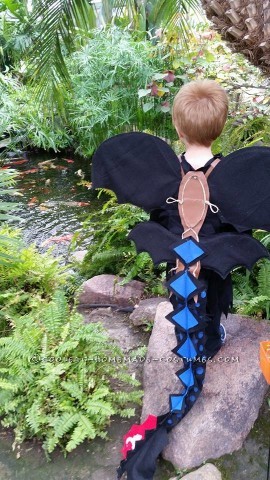 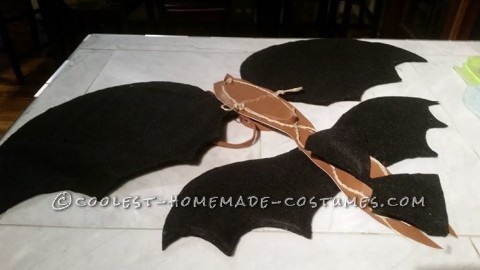