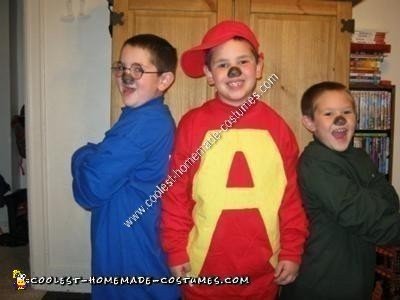 My boys decided on a homemade Alvin and the Chipmunks group costume idea. We used the “old style” costumes. I searched the web and stores for 3 matching shirts of different colors. I found 3 mock turtlenecks in Men’s sizes (so the shirts would be oversized on my boys) in Red, Blue and Green. To add to the shirts and so when the trio was separate I also added iron on’s to the shirts. To make them look more like a chipmunk we also made tails.

Making the Alvin and the Chipmunks Group Costume

Iron On’s – I bought some Avery dark color transfers. I found on the web the Alvin and the chipmunk logo and individual pictures of each of the chipmunks. Following the directions on the Avery box, I printed those out and ironed them onto the shirts. We ironed the logos on the back of the shirt. The individual pictures of Simon and Theodore we ironed on the front chest of the turtleneck. Did not do this for Alvin as he has the big “A” on his shirt.

Tails – To add a little more to the costume we made tails. I went to the fabric store and purchased enough fabric of a faux fur material. Then got a bag of stuffing and some wire. Cut the material in the length desired. Turned it inside out and sewed all sides together leaving a hole to stuff the stuffing. Turned it back to normal and stuffed it with the desired amount to make the tail puffy. Then added a piece of wire to help give it some shape. With the opening, I attached them to the sweat pants using safety pins.

Once the shirts were on, I took a pair of scissors and cut a slit in the back of the shirts to poke the tails through (do not do this if using the shirts again).

To complete Alvin, I purchased a red mock turtleneck and a plain red hat. I bought some yellow felt at the fabric store and drew a large “A”. Cut out the “A” and with fabric glue, glued it to the front of the shirt.

To complete Simon, we purchased a pair of Harry Potter glasses from our local Halloween store. They were perfect in matching Simon’s glasses.

To complete Theodore, we found the cutest little boy we could! This costume is pretty easy as he just wore the green shirt that had a picture of Theodore on the front chest and the Alvin and the chipmunk logo on the back.

The boys wore black sweatpants and to add some finishing touches we colored their noses black.

The whole night we got lots of compliments and everybody knew just who they were! This homemade Alvin and the Chipmunks group costume idea is great and didn’t cost a lot of money!

Take a look at some more homemade Alvin and the Chipmunks costumes. 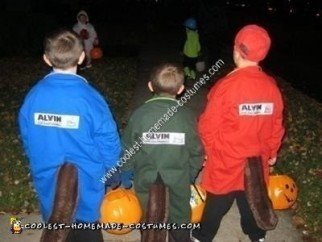