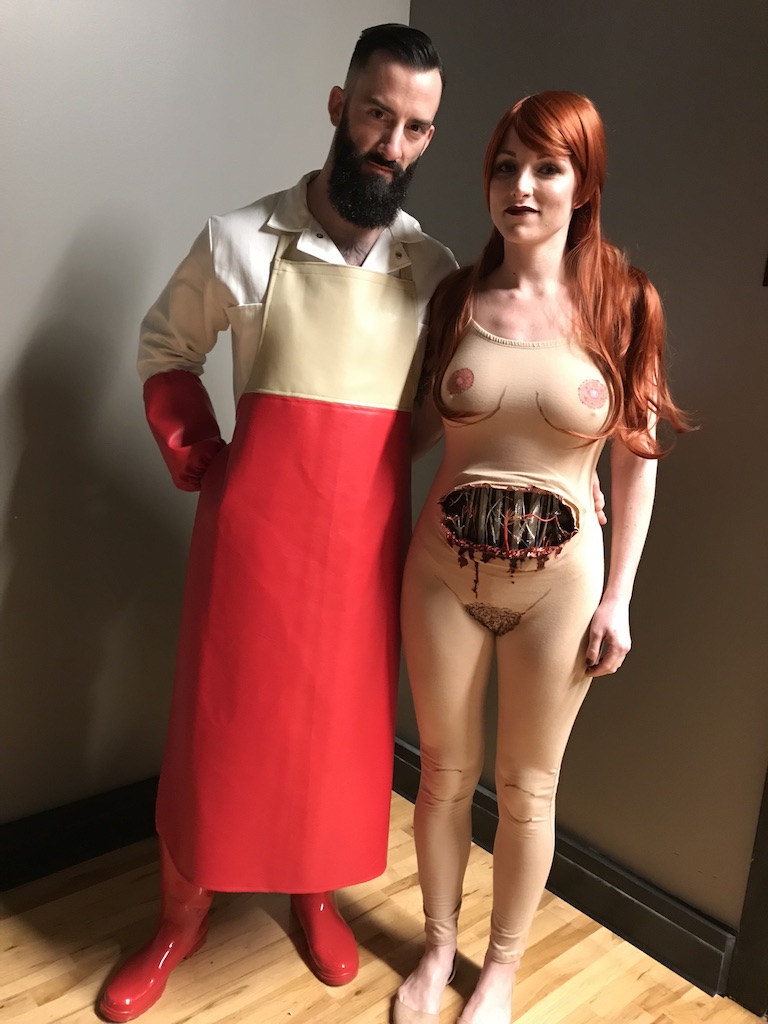 My boyfriend and created this Westworld couple costume! My boyfriend went as one of the “cleaners” that fixes the robots behind the scenes when they need repairs. I was a “host” robot that got my stomach cut open and my robot wires were sticking out.

The hosts are naked when they are being repaired, so I bought a skin colored body suit and painted on breasts, pubic hair, and other body parts to indicate that I was naked. To make the robot “guts,” I went to the hardware store and bought a bunch of wires and hardware stuff. I made an elastic waistband and hot glued the wires to the elastic. Then I got thin chickenwire and placed it around the outside of the wires to make the shape of the wound. I added liquid latex to the chickenwire and then painted it skin colored to make it look like my skin had ripped open. Then I painted the whole thing to make it look bloody. I cut a slit in my body suit so that the wound could stick out. The wound was attached to the elastic waistband so it was attached to my waist and then I put the bodysuit on and placed the slit over the wound.

For the cleaner outfit, we bought a white jumpsuit/coveralls. I made the apron and arm cuffs from vinyl fabric. And he wore red rubber rain boots. Unfortunately we went to a lame party and no one knew what we were supposed to be, but I still had fun making the Westworld couple costume anyway! We almost didn’t get let into the party because security patted me down and she stuck her hand in the “wound” and there were wires sticking out and she said it could be considered dangerous. I said “trust me, no one else will be sticking their hands in there” haha! It was still a fun night.