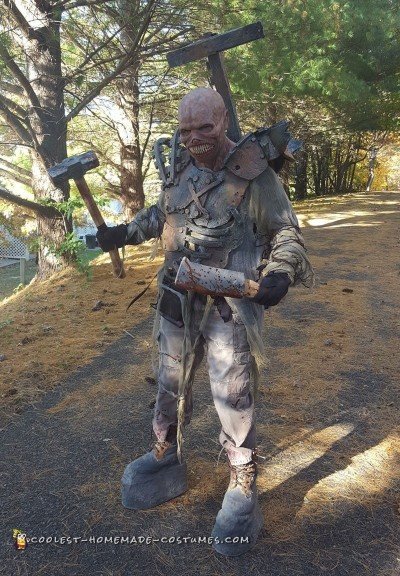 Halloween is my passion, and I love the haunted attraction industry.  I make costumes to use in haunted houses, although I also love making them for the fun of it.  This character—The Abomination—was inspired by Clive Barker’s work and SPAWN.  I love the aesthetic of the characters in Clive Barker’s movies/stories and Tod McFarlane’s comics, and I drew a lot of inspiration from this when coming up with this character.  The conception of this costume came from hearing an air raid siren while watching Silent Hill.  Hearing that eerie “apocalyptic” sound sparked the idea for this style monster.  My goal was to make a terrifying, yet also realistic character.

The costume armor was constructed from EVA foam floor mat.  I used a heat gun to shape the foam, and I cut/carved it with scissors and razor blades to turn it into the shapes I wanted.  Additionally, I sanded the surface to make it more uneven and rough looking.  To form the complete set, various pieces of foam had to be glued together with hot glue (super glue works, too).  I then coated the entirety of the foam armor in latex rubber to help protect it.  I then hand-painted it to give it a rusted, metal look.  The outfit is mostly composed of random clothes from the thrift store; I took old clothes and aged them to match the look I was going for.  I did this by starting cuts with scissors then ran a wire brush and sand paper over the cuts to “fray” them.  The gauze fabric included under the armor was taken from an old, store-bought costume I had lying around; I misted it in spray paint to help age it.  The barbed wire wrapped around my arms was made with jute twine, twirled together into the general shape of real barbed wire, and then coated in red/brown liquid latex.

The tool belt I bought from the hardware store, then I aged it with a torch.  The entire costume was splattered with homemade fake blood.  I used silicone caulk mixed with oil paints to make the blood because it gave me a realistic “gunky”, “wet” appearance.  The platform boots are built from a combination of normal, hiking boots and EVA foam.  I glued many layers of foam mat together to form a block; I then cut/carved this block of EVA foam (with a band saw) into a “mound” that was shaped to merge right onto the bottom of the boot.  I glued it to the boots with liquid nail and coated the entire thing in latex rubber to seal it all together.  This gave me an additional six inches in height to add to the menace of the character.  The fake weapons were also made from EVA foam.  I cut the foam in the shape of the “blades” I wanted then coated in latex and painted; some of them I glued to wooden handles.

The mask I am wearing is a silicone mask from Composite Effects that has special meaning to me because I got to help design it.  I became friends with the owners of Composite Effects years ago.  One of the owners let me sit with him one day while he digitally designed this particular mask, Sin of Sloth.  I was able to provide my input to the design process and have say in the final product.  Being able to help design a mask by my favorite mask company was truly a dream come true.

The reactions I received while wearing this at the local haunt I volunteer at were priceless.  People were terrified by the realism in the entire costume.  When people came in to take photos they would feel the armor and realize it was foam, and I’d hear them whisper to each other: “It’s not actually metal.”  It was awesome to know that I made the armor so real looking people actually thought it was metal.  The realism in the mask helped sell the entire character because the mouth moves as I speak, so I could interact with patrons.

The costume cost about $80 to make.  This includes the price of the EVA foam mat, liquid latex, clothing (purchased from thrift store), tool belt, boots (thrift store), and painting supplies.  That price does not include the tools used or the scrap wood incorporated in some of the prop weapons.  The mask was an additional $600, but this style costume/techniques could easily be used with any other mask/makeup.  I highly recommend EVA foam sheeting for use in costume fabrication.  It works great for making lightweight, realistic armor! 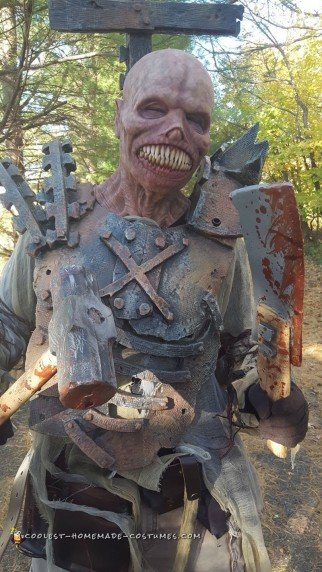 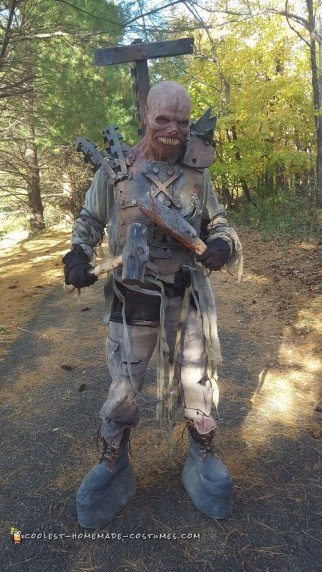 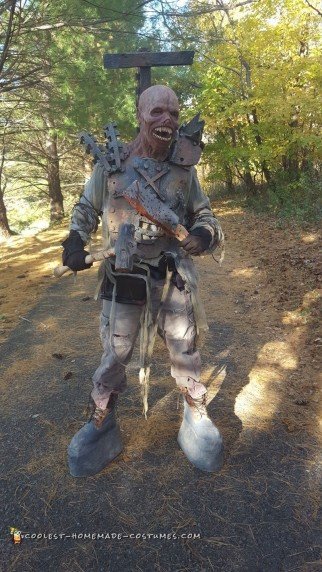 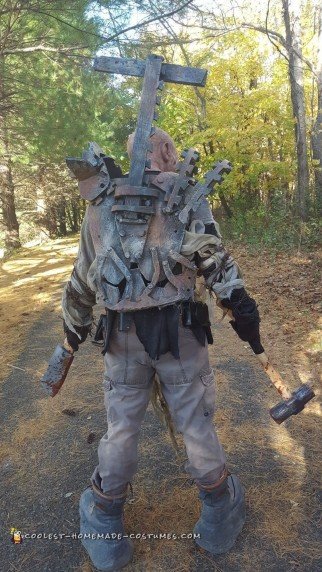 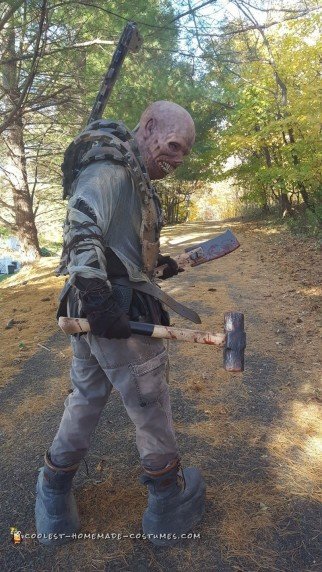 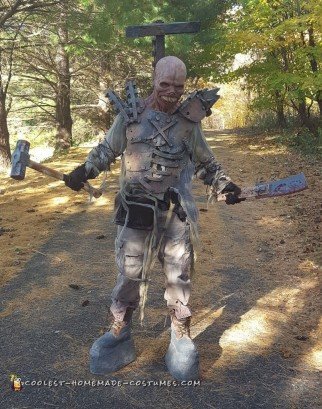