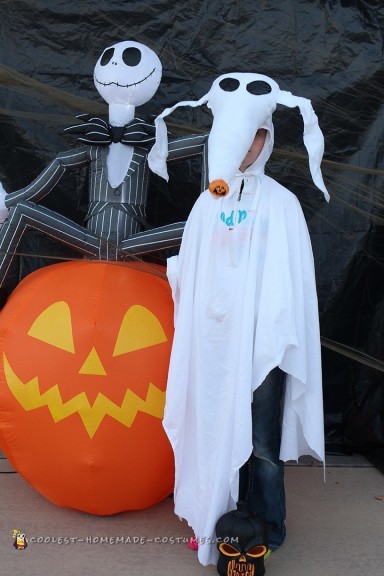 The Nightmare Before Christmas! It’s such a crazy, fun, theme isn’t it? We dressed up as a family, but here I am showcasing my daughter’s fabulous look that night! This costume took about 3-4 hours to make in total time, but it was worth every minute! Here is how I made it:

I bought a sheet at Goodwill for $4 and cut it in half and then folded it and cut a hole in it for her head. This was just put on like you would wear a cape!

Next, I bought a white hoodie from Goodwill for $4 and used it as a “base” for the head!

I made the head by taking a picture of Zero from Google images and drawing out my own pattern onto white fleece material. (I bought a few yard of this material and I probably used about $6 worth of it as I got it on sale!)

I sewed the pieces together and then stuffed them with fabric stuffing. Then I took some black fabric paint and painted on the eyes! For the ears, this was my favorite part! I cut out pieces of fleece for the ears and then took some wire that I found in the floral section of Walmart ($3) and used a glue gun to glue the wire all around the perimeter of the ears. I then glued the ears together so that you could not see the wires. Then I took a needle and thread and sewed the ears onto the head.

Next, I took a jack o’ lantern light off of a strand of lights that I had and I wired it to the end of the head for the fabulous nose!

The costume was a huge hit! Everyone knew who she was and the ears flapping in the wind were awesome! 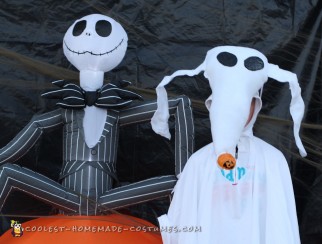 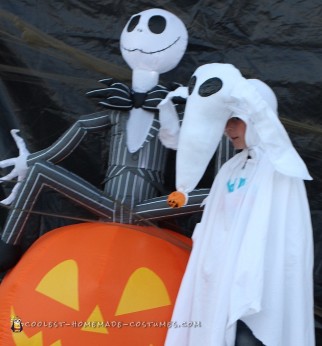