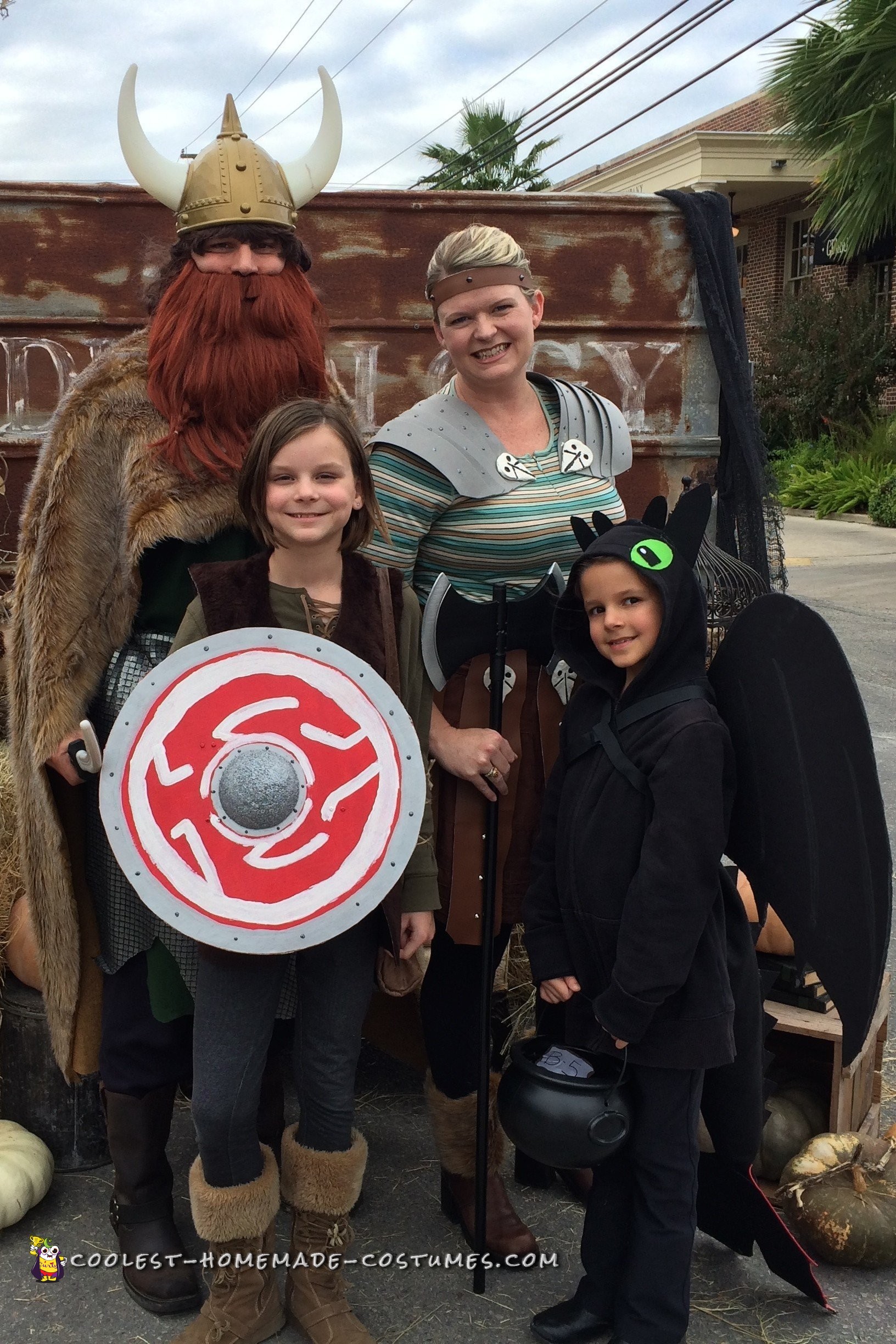 My youngest daughter loves the How to Train Your Dragon Movies.  When she asked to be Toothless I thought it would be fun for the whole family to dress up (we love costumes).

For Toothless I used a black hoodie from Goodwill as the basis for the costume.  I added stiff felt ears and spines and hot-glued the eyes onto the hoodie.  I used a black felt scrap to make the tail and just hot-glued it into shape, adding stiff felt spines, stuffing it with batting, and cutting slits to loop a ribbon through to tie around her waist.  It didn’t stay up as well as I would have liked and in restrospect I would use a different method to attach it – maybe suspenders?  I cut a hole in the back of the hoodie and put the tail through.  I just free-handed the shape of the fin at the bottom of the tail and covered half of it with red craft foam.  I found a template of the skull design and cut it out of regular paper, then glued it on the foam.  She wore black pants, shirt and boots underneath.  Her wings were made from black foam board.  I punched holes and threaded broad ribbon through, then tied it over her shoulders.  Total spent:  about $10 (hoodie was $4, foam board $4, the felt was mostly scraps)

Hiccup’s costume was leggings and a shirt found at Goodwill.  I was lucky enough to find a shirt with a leather lacing at the top but was prepared to punch holes and do that myself.  We also found the fur-topped boots and leather bag at Goodwill.  Her Grandpa made the shield from scrap wood and we added half a styrofoam ball for the center raised part and painted it ourselves. Total spent:  about $10 (boots were $4, shirt, leggings and bag were $2 each)

Stoick the Vast’s costume was the most expensive since I had to buy the fur to make his cape, felt for the tunic and “sparkly” material for the dragon-skin overskirt.  We found the Viking helmet at Goodwill and borrowed a dagger.  He wore his own pants, shirt and boots.  I bought the fabrics in three visits using coupons I found online.  The felt tunic is just a length of green fabric thrown over his head with a hole cut out, then belted with his own belt (it was open at the sides, but not noticable due to the fur cape).  The “overskirt” is a sparkly fabric worn inside out, tucked into his belt.  I bought the beard on Amazon for $10.  Total cost:  about $50 (fake fur is expensive, even with a coupon!)

Astrid’s costume was the most labor-intensive.  I spent a few days making the bird skulls for the skirt and shoulder armor out of white Sculpey.  I used a pencil eraser to make the eye holes and the handle of a paintbrush to make the lines.  I also made an indention on the back with a brad before they were baked.  Once they were baked I used watered-down black paint to paint the eyes and lines in the skulls.  Then I hot-glued a brad to the backs where I had made the indentation.  For the “leather” skirt I bought a scrap piece of brown ‘pleather’ and cut it into irregular strips.  I folded the strips over with a large-enough gap so that a belt would fit through and hot-glued the strips.  I then punched holes into the strips and attached the skulls with the brads.  I also found a package of pointy brads at Michaels and put 4 on each strip for the “spikes” on her skirt.  Then I threaded the strips onto a belt.  I wore my own tights and brown skirt under the “leather” strip skirt.  I found a green-striped shirt at Goodwill and dyed it with tea so it would look a little more weathered.

For the shoulder armor I used gray craft foam cut into strips and hot-glued together.  I used puff paint for the ‘rivets’ and attached two of the bird skulls by punching the brads right through the craft foam.  I just safety-pinned the shoulder armor to my shirt.  For the headband I used a strip of pleather from the skirt and punched three brads through it, then tied it around my head after braiding my hair.  I cut a strip of fur from Stoick’s cloak and safety-pinned it as boot toppers on my own brown boots.  I found the battle axe at the dollar store.  Total cost:  about $15 ($3 for the shirt, $5 for the pleather, $7 for craft foam and puff paint).

We got a lot of attention and actually had our picture in the local paper. 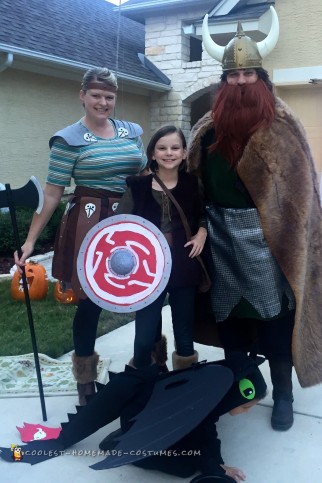 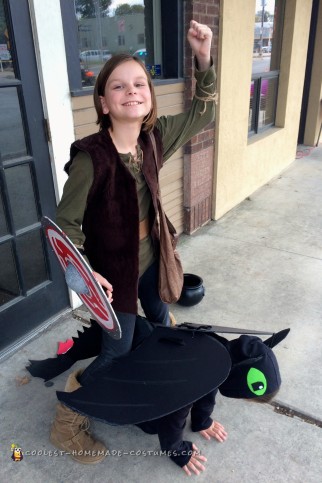 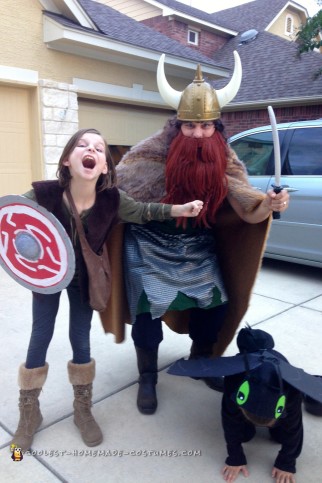 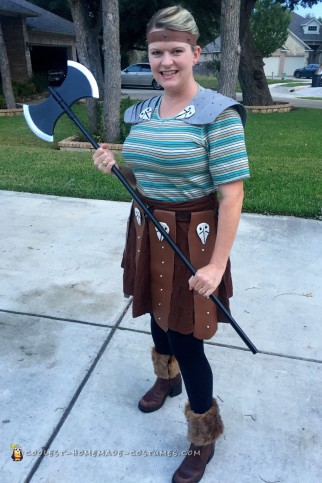 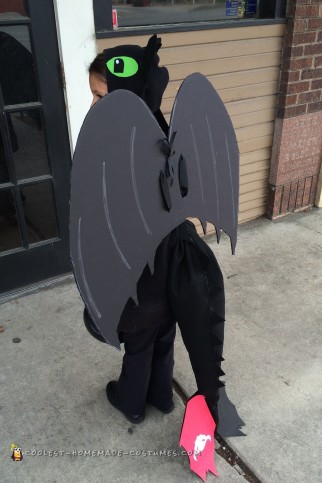 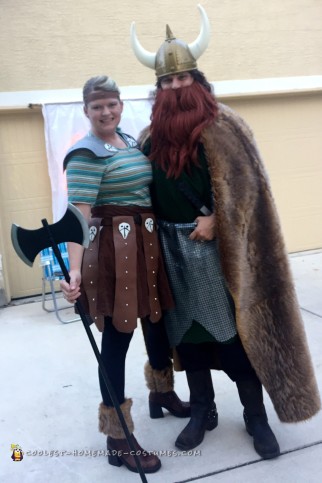