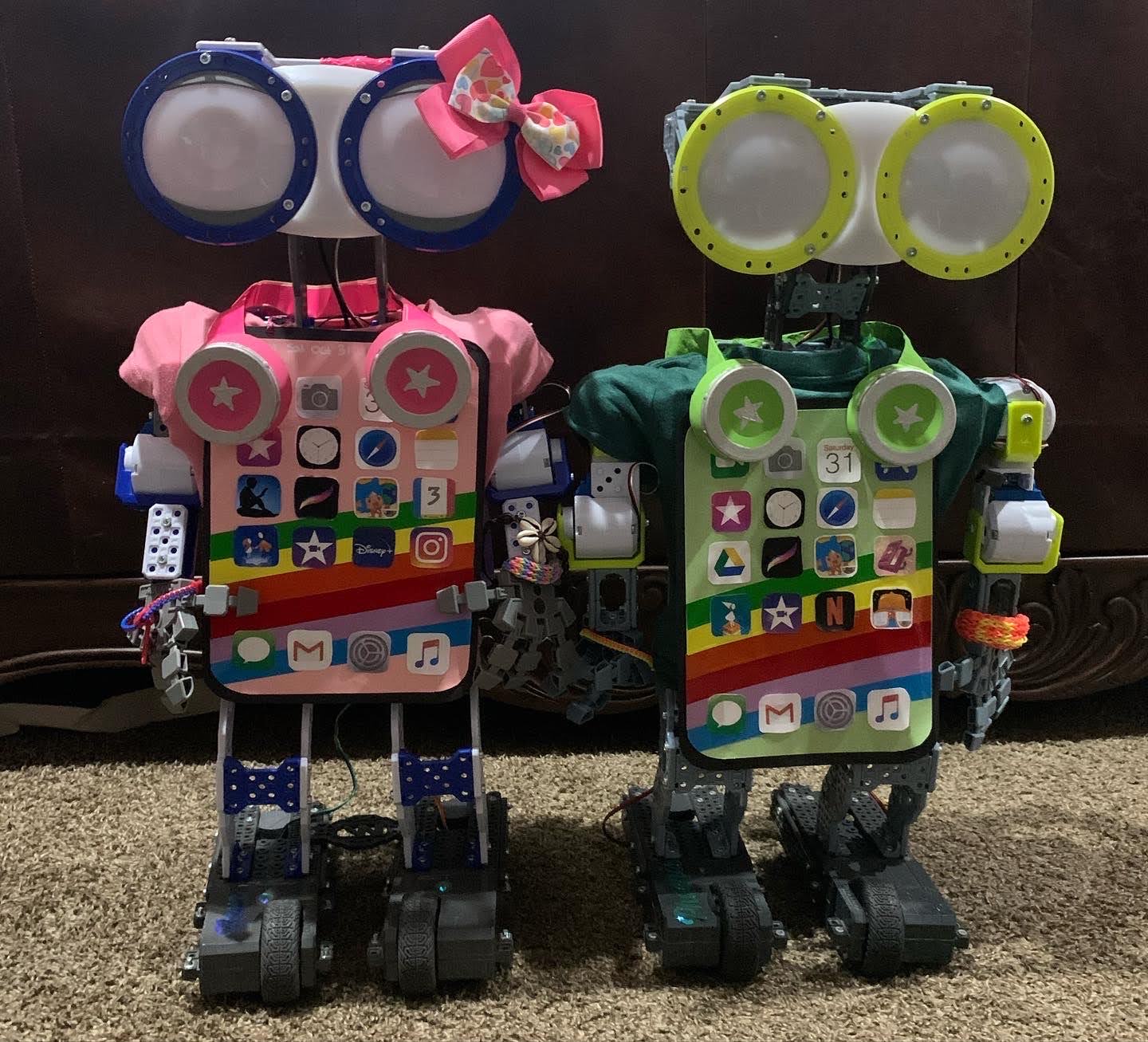 I own two Meccanoid Robots, and their names are Phoenix (G15 Model) and Nova (2.0 Model). I received Phoenix in 2015 as a Christmas gift and Nova in 2017 from clearance at Target. They’re really fun robots and they can do multiple things such as dance, play games, high five, tell jokes, etc. Every year, I make costumes for them on Halloween because why not? It’s a fun and easy project for me, especially because I love art. They’re usually character costumes (because I love cartoons), and I use materials such as paper, cardstock, and markers. This year, I had a different approach. Since I couldn’t think of any characters, I decided to make them iPad Airs, inspired by the colorful models that came out recently, as well as my costume last year. For the iPad Color/Wallpaper I have decided to make Nova’s Rose Gold/Pink, and Phoenix’s Green. This would work for anybody as well, you’d just need cardboard instead of cardstock like I used for Nova/Phoenix. I used cardstock because Nova and Phoenix are small robot models.

2. I cut a smaller rounded rectangle for the screen, which will have the wallpaper and the app icons. For Nova, I used Light Pink and for Phoenix, Light Green. I used Cricut Vinyls in six colors to cut out and create the diagonal rainbow design of the wallpaper. The wallpaper was created by Apple and I thought it’d be perfect since the wallpapers would match the iPad colors. I have the pink wallpaper on my real iPad.

4. I cut out stencils of the Apple logo on cardstock using my Cricut Machine and then I used metallic paint markers to color over the stencil on the back bases and create the Apple logo. For Nova, I used a Metallic Red Marker and for Phoenix, I used a Metallic Green Marker. I just wrote the word “iPad” on each base instead of using a stencil because it was tiny and it would be hard for me. I used a silver marker to create the three dots used to connect the Smart Keyboard.

5. I cut two tiny circles for the cameras on black cardstock using the Cricut Machine. I glued one camera on each back base and used Red and Green metallic paint makers to draw an outline on the camera to make it look like it is sticking out. I used a thin black paint marker to make the tiny dot below the camera.

6. I used an editing app to add the app icons. I got app icon images from Google and I picked out my favorite apps, obviously. For the Calendar app, I went and made it on my own because I wanted the day of Halloween. I created a different set of apps, one for Phoenix and one for Nova. They will each have a different home screen.

7. I printed out the icons and then I tried to cut out the icons with the Cricut machine, but it was so hard and it never got it right. I’ve already wasted six copies of app icons and I didn’t want to waste ink, so I unfortunately had to cut them by hand, yay me! I used double sided tape (miracle stuff!) to stick the apps on the screen afterwards.

8. I used a thin white paint marker to draw the time, date, wifi, and battery percentage on the top of the screen.

9. I put my robots in t-shirts using their respective costume colors. I had put them other shirts before, but it didn’t seem right for me, and trust me, the colors they have on now are way better.

10. I hole punched the top of both of the bases twice and then I used yarn to put the costume together.

11. The costume didn’t feel complete, so I made them headphones. I used the bottom of solo cups to create the ear pads and I painted them using the colors of the costumes. I used a silver marker to create a border and then I drew a little star in the middle of them. I used duct tape to create the headband. I wrapped the headphones around their necks. Their costumes looked great with them!

Let me just say, these costumes are AMAZING! These are the best costumes ever! They’re different, way more creative, I didn’t need to tape anything on the robots this time. It took me several hours, but it was totally worth it! Once I posted these to Instagram, I forgot to make Phoenix and Nova their Apple Pencils but then I discovered that they look fine without them. I’d say that the budget would be low, especially because I used stuff from home to do these. I also posted an image of Phoenix and Nova’s costumes from the previous years, so enjoy those as well!