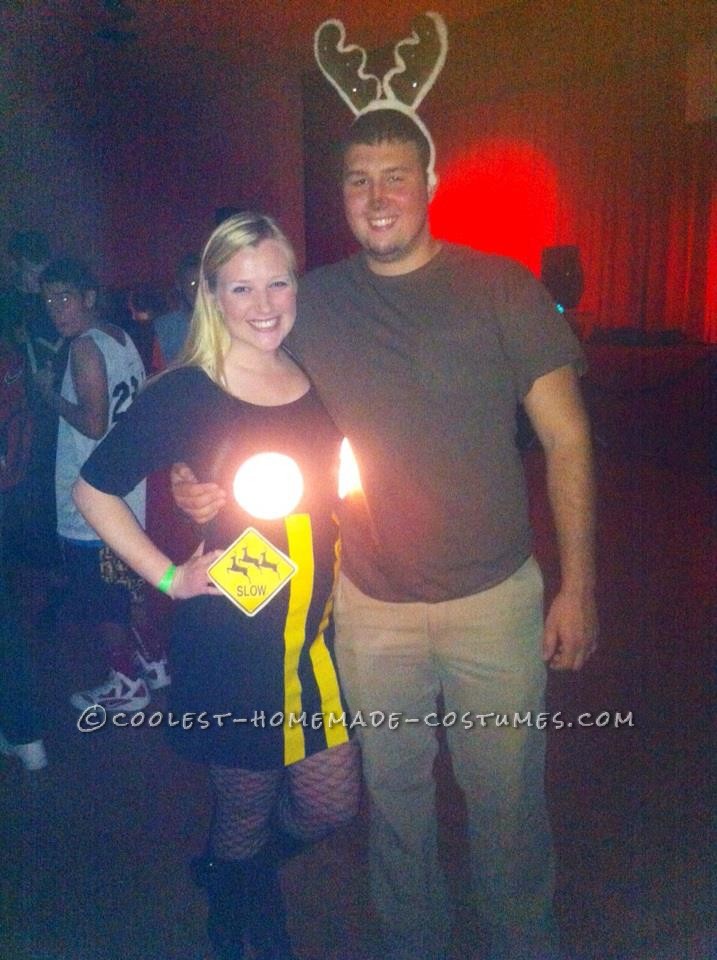 October has always been my absolute favorite month of the year, and with that, Halloween is my favorite holiday. I was the one kid in my elementary school classes who said that Fall was my favorite season, not summer. It’s not just a time of year that I enjoy, but has become a bit of an obsession. In college, I was always known for winning the “Best Costume Awards” at our university’s Halloween Parties. My costumes were simple and funny, and everyone looked forward to seeing what I would pull together for the year. I spent months gathering ideas, and kept my costomes a secret until the day of the party. 2012 was the first time that I had a steady boyfriend for halloween. Obviously, I was going to take advantage of being able to do a couple’s costume in the first time in my history! We toyed around with the usual ideas, but I wanted something that no one would have seen done before. That is where the deer in headlights was born. The idea was so simple, yet so perfectly funny, and was sure to grab the attention of everyone (I mean, it did involve lights after all).

I wore a cotton/spandex black dress that I found at Walmart. The headlights were made of “Tap Lights,” and took AA batteries. The weight of the lights were hard to keep up, but I was able to duct tape them to the inside of the dress, and tape them to the cami I wore under the dress for extra support. The road stripes were made out of yellow duct tape. The deer just wore a brown shirt, brown pants, brown shoes, and some christmas antlers we bought on Amazon. His nose was colored with eyeliner.

We won the “Best Couples Costume,” “Funniest Costume,” and “Most Creative Costume” Awards for the night and walked away with a cash prize! The staff, faculty, and the police officers who were hired as security were the judges… the police officers thought we were absolutely hilarious! Especially since my univeristy was in a suburban area with an over abundance of deer.

2 thoughts on “Deer in Headlights Couple Costume with Real Lights!”