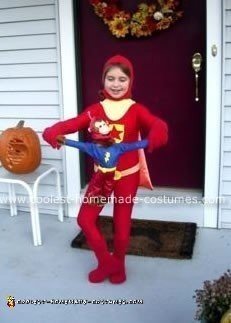 My daughter wanted to be WordGirl from PBS for Halloween, so we made her a WordGirl Costume including Captain Huggy Face. We used a yellow t-shirt under a scoop neck red unitard, and made a cape with orange and red satin. The head cover I ordered from a dance wear store to match the unitard.

The emblem on the front is just cut from craft foam and double stick taped to the unitard. The gold belt is from the thrift store with a buckle cover made of craft foam. The boot covers are just the bottom half of red tights. You can only use them once (because the get pretty beat up when you walk) but they worked for the night. The gloves are red fleece gloves for winter, and since we live up North this seemed to be a good choice once night fell.

Captain Huggy Face is one of those monkey with Velcro on the hands that you can put around your neck. I used fabric scraps to make his costume and used scraps of craft foam to make the emblem and belt. A silver pipe clean at the top finished it off. Our daughter was one of a kind!