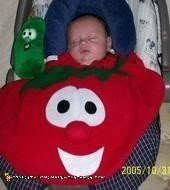 This is the Veggie Tales costume I made for my son. Since he was so young and slept A LOT I wanted to be able to carry him in his car seat. The only problem was when I would buckle him in, it would cover up most of his costume.

My first task was picking a costume idea – I chose BOB the Tomato from Veggie Tales because my son’s initials are B.O.B. and my husband’s name is Larry (sorry couldn’t get him to dress like a huge cucumber even though it would have been perfect since he is like 6 foot 3!).

Then I needed to figure out how I could make the costume so it would go over him while in his car seat without having to loosen or adjust his straps (safety in mind!).

I used felt and hot glue for this costume. I had a rectangle piece of red felt that would fit under his back in the car seat and fold over the front for BOB’s face. I cut small holes tops and bottoms of the red felt (the short ends). I then made a rope out of more red felt. I threaded it through and when I folded the front part of the red felt over my son and his car seat I could tie it on each side and just tuck in the extra fabric to make the circle for BOB. After measuring in the car seat I cut a few holes for the car seat buckles to fit in.

My final step was to make the face. I bought the smaller felt pieces in the craft section and used them to cut out the eyes, nose and green stem part. The nose was stuffed with a little pillow padding but all of it was hot glued on.

This was the perfect costume since he slept the whole time and I only got him out once to change his diaper. It was also chilly and this kept him nice and snugly warm! No one believed I actually made it but it was very easy and I was very proud of it!

I hope maybe someone else can use this Veggie Tales costume idea for their little one!