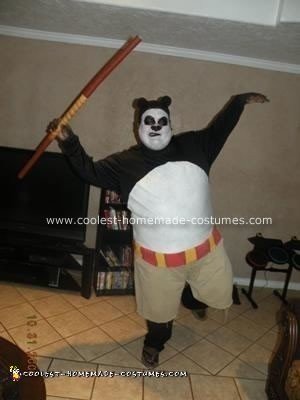 The Homemade Kung Fu Panda Costume was created by me for my husband. Because he is a big guy he was never able to wear anything other than a plus size boring bought costume. So when the Kung Fu panda movie came out I knew it was just the right one for him.

The top part of the costume was a light solid black sweatshirt. From a piece of white cloth I cut out the front part (the white round tummy part). For the belt I sowed a long piece of cloth to resemble the belt Kung Fu panda wears. I used red and brown spray paint for the lines, taping each line with scotch tape in order to prevent over spraying.

He used a cargo short and underneath some black workout tights, with brown flipflops. For the ears I used a black hairband and hot glued two ears. I also made a black little tail and pinned it to his but on the cargo shorts. I taped two tubes of whats left of Christmas wrapping paper and also sprayed it brown with a band of scotch tape.

He painted his hands and toes with hair paint and I painted his face to look like the panda in the movie, this completed the Kung Fu panda look.