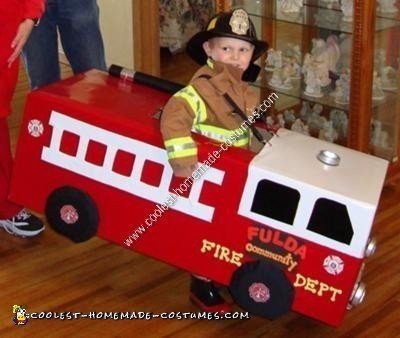 I was so excited when my 3 year old son said he wanted to be a fireman for Halloween. So, I got to work researching how I would make this all happen. After Googling ideas for making a fire truck, I stumbled upon this website. After looking at some of the submitted pictures for homemade Fireman and Fire Truck Halloween costume ideas, I was set to go.

My 3 year old son already had a fireman costume, so I elaborated from there by making a fire truck to complete his costume. I started with a long, narrow box that, at one time, housed a wagon in it. From there I cut a small hole out in the middle of the box for his body. I made it just big enough to fit his body and fire fighter coat in; I wanted it to fit snugly. I purchased 2 yards of red, 1 yard of white, and 1 yard of black vinyl, some Velcro strips, belt-like pieces (for the suspenders) and 4 suspender clips, a hot glue gun and glue sticks from Jo Ann Fabrics.

For the doors, I used foam letters to put the name on the door. I decided it would be really neat if I had the truck named the same as our town’s fire department. I used the long flaps from the box to make the side ladders and covered them with the white vinyl. After they were covered, I duct taped them to the sides of the fire truck.

To make the wheels, I used two small dessert sized paper plates, filled the inside with foam to keep its shape, and taped the edges with duct tape. I then covered the plates with the dull side of the black vinyl and hot glued and duct taped it on the backside of the plate. For the rims, I printed off the fire and rescue logo and Velcro-ed them to the middle of the tires. To attach the tires, I used strips of Velcro, taped to the back of the tires and then attached the tires to the sides of the truck.

For the lights, my husband found battery-operated LED lights, which we used for the headlights and the light on top. The lights were self-adhesive, which stuck very nicely to the vinyl. We covered the top light with a pink plastic Dixie cup to symbolize a red flashing light with siren (my son’s voice provided the siren) :-)

The taillights consisted of Halloween flashing safety lights, which were duct taped to the back of the fire truck. For the hose, I took 2 paper towel tubes, taped them together, and covered with the dull side of the black vinyl. I applied silver duct tape to the ends to symbolize the clips and fastened the hose down to the top of the fire truck with silver twist ties by poking 4 small holes through the box and threading the twist ties through the holes.

I used the foam letters again for the ‘STAY BACK 501 FT’ sign on the back of the fire truck. The American flag was an iron-on patch that I got from Jo Ann Fabrics, which was self-adhesive and attached very nicely to the vinyl. The suspender clips were simply attached to the truck (they grabbed nicely on the vinyl although they did come off a few times throughout the night).

All in all, my son LOVED his Halloween costume. We got a lot of compliments and the Fulda Fire Chief really liked the fire truck touch. 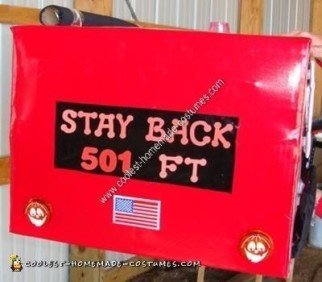