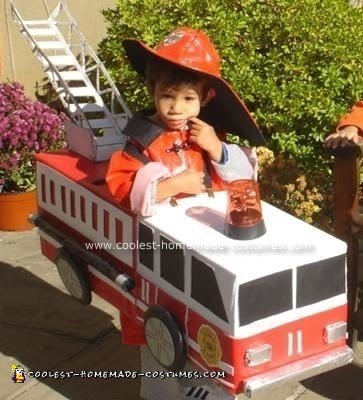 I got the idea for this Fireman and Firetruck Costume from this website. I borrowed bits and pieces from other submissions. I started with a long narrow box that I purchased from a U-haul store (about 5.00).

Because my son was only 3 years old, I cut the box in half to make it shorter and lighter. I taped the seams with some masking tape that I had lying around. I cut a small hole out for his body. I made it small enough that his body and his fire fighter coat (with a warm sweater) could fit in. I wanted it snug.

I purchased 3 yards of red, 1 yard of white and 1 yard of black vinyl, a Velcro strip, stretchy belt-like pieces (for the suspenders) and 4 suspender clips from our discount clothing/fabric store (in this area it was Jomar Fabric). I think the vinyl was 2.99 a yard, the Velcro strip was 1.00, the suspender stretchy stuff was 1.00 and the suspender clips were .20 cents each. I had way too much vinyl—1 to 1 ½ yards of red and ½ yard of white and black would have been sufficient.

I hot-glued the top of the fire truck with the white vinyl and then I cut and glued the red vinyl. I used the white vinyl to make the strips along the side and to make the numbers on the front and each side. I used white-out to paint the mini-door handles. I made the windows from the black vinyl. I used a piece of poster board to make the “ladder” on the sides. I used the left over pieces of cardboard box (the closing flap was the base of the ladder and the long side was the ladder, of course, cut to size) to make the top ladder. I am NO artist. I cut the closing flap piece a little smaller. Then I just drew zigzags on the cardboard, cut and then painted it. The fold flap from the box formed the base that I hot-glued on top. Once the ladder was painted (with a kids white paint) it was really stiff and stood up nicely. I hot-glued the ladder and the “base” to each other and then glued it to the back of the truck.

To make the wheels, I used two small (dessert sized) paper plates that I had. I filled the plates with shredded paper pieces from our paper shredder (finally, a use for those shreds! ). I taped the plates together (across the plate and then around) with masking tape. I used the wheels to cut circles in the black vinyl and I hot glued the circles around the plate. (Note: this was the part that I was least satisfied with. If you can sew and have the time, it might look better.) I bought 3 sheets of silver cardstock from our craft store for about 3.00 total. I used another paper plate (that I cut a bit smaller) to trace a circle for the rim. I drew the rim on the silver paper and then hot glued it to the wheels. I hot glued the back of the Velcro piece to the bottom of the truck and to the back of the wheel, then attached.

I used left-over air conditioner foam (seals the window around the a/c unit) covered with aluminum foil for the lights and front bumper. I went to our local firehouse and they gave me the two stickers on the side. (They were really excited about the costume idea!) For the hose, I used a left over piece of plug cover, stuffed with pieces of air conditioner foam to help keep the volume. (The plug cover was from Ikea, it is used to gather and cover your computer plugs, etc. so they look neat). You could use a paper towel tube too. It was covered with black vinyl and then I added a piece of the silver paper at the ends. I ordered a 7 inch battery operated red flashing light from a website that sells novelty items (about 4.00). My son LOVED the flashing light! I didn’t think I could handle a siren but it would be a nice touch. I attached the light with a piece of Velcro (hot-glued, of course) to the truck and to the bottom of the light.

My son LOVED his costume and I got so many compliments. The truck didn’t cost more than a store bought costume and was a labor of love. I made this Fireman and Firetruck Costume over a weekend (and I work full-time outside the home). Happy costume making!