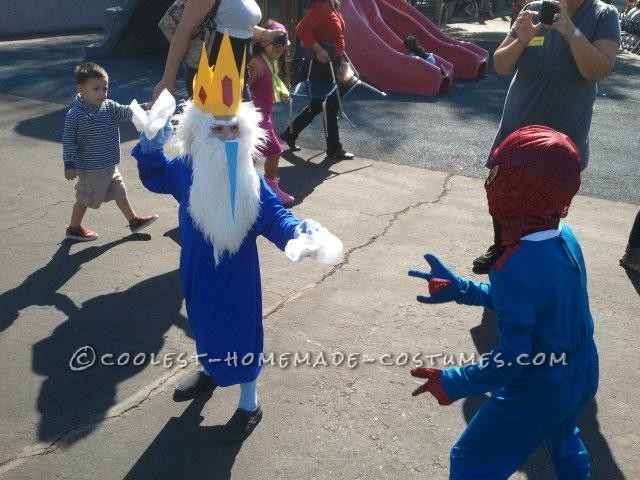 We are all Adventure Time freaks. We have DVD’s not to mention at 89% DVR space from all recorded episodes. It was no surprise that we were going to costume up some Adventure Time shenanigans. Both of my children portrayed a character from the cartoon, but I decided to submit this piece on my son’s costume. Deciding on which character he was going to be was the hardest part. In the end, he was eventually going to be the Ice King.

Starting the process was not at all hard, or so I thought. I began with the crown. I used an old poster board, sized and to cut and paint. I wanted the crown to look exaggerated, so I made everything huge. I used a piece of elastic string and tied each end to hold the humongous piece on his head. I used an old juice bottle, cut and painted the pieces to look like the jewels and glued them to the crown.

Before the Ice King was a crazy wizard, he was a man named Simon. I had not completed the rest before we were invited to our 1st comic book convention. For that show, I used the crown and dressed up my son as Simon Petrikov. Complete with cool blue glasses and red bow tie. My son’s hair was long at the time. He was a perfect match for the 2 in 1 costume.

The hardest part for me was finding the long wavy white hair. I didn’t want to use a wig for this. My 5 year old wouldn’t last longer than 5 min. I convinced his uncle to let us have some of his car interior fur and directly glued this into the crown.

I am not great at sewing, so I went to a local discount store and found a royal blue men’s soccer long sleeve. I sized it down to the size of my 4 year old and adjusted the arm lengths to fit him. At the dollar store, I found some light blue women’s socks and gloves to match. Skin color is complete. I used bunched up paper towels as Ice Balls. He was Ice King. 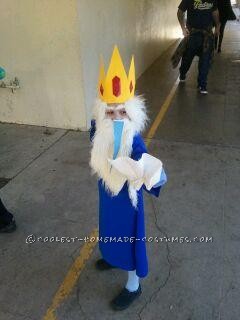 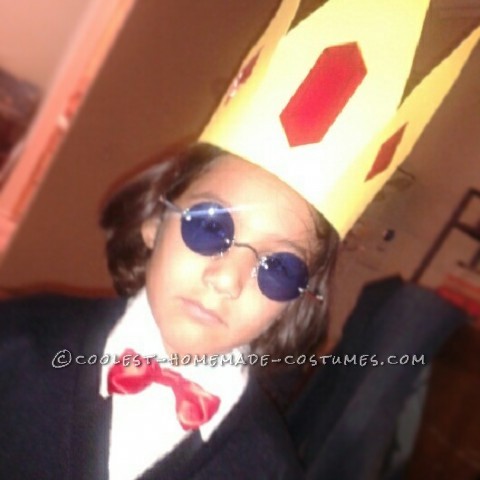