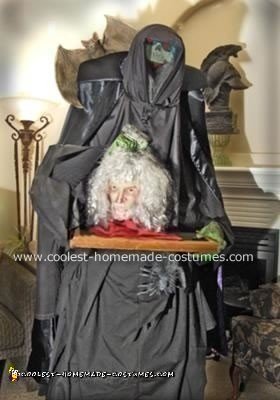 Always fascinated by fooling the eye with the unexpected placement or appearance of the human body adapted to another entity, i.e. a classic horse and rider costume, it was time to adapt an entity against which a head with no body could play.

The entity was decided by the fact that there was no money available, (a total of $4.00 was spent for the “creature hands”) and what materials were available.

Utilizing an upright bass stand, a set of black sheets, a formal cape and other bits and pieces from Halloweens past as well as some plumbing supplies and assorted scraps of lumber Grim, became the stage for The Horseless Headsman.

The armature of Grim is positioned on a tricycle-like apparatus to allow mobility and a seat for the body to rest upon. PVC tubing was cut and joined so that Grim had arms that formed a connection to the hands.

The covering shroud is merely draped and held in place by the cape and a few pins and Velcro; no sewing was needed.

The head has freedom of movement coming through the folds of material in an opening in Grim’s chest, covered, in part, by the hairy wig. That is how I made this Grim Reaper Costume.

Grim Reaper with Half Zombie in a Cage Illusion Costume