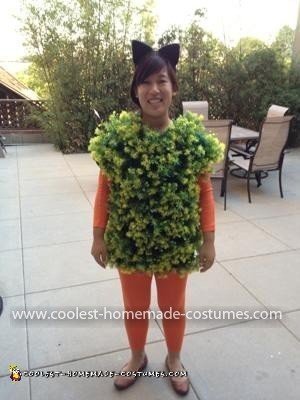 I loved Chia Pets when they were popular in the 80s/early 90s, so this Homemade Chia Pet Costume was my attempt as a homage to it. I purchased aquarium plants and attached them to a green t-shirt… one by one. It was a labor of love that took about 8 hours to get it to a full coat. I used three different types of aquarium plants to give it a textured look. They were held together on plastic grids that held the plants through prongs.

I made strategic holes in the shirt and snapped each of the leaves back on. I lined parts of the interior of the shirt with felt so it wouldn’t poke me too much throughout the day. It was actually pretty comfortable and not cumbersome at all.

Another difficult task was to find a shirt and leggings that were the same exact color. I bought two pairs of leggings and cut out the middle crotch part of the leggings and wore it as a shirt instead. So, two pairs of orange leggings, a green shirt, animal ears and lots and lots of aquarium plants. 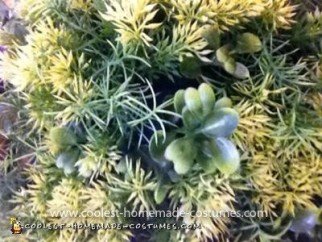 Funny Chia Head and Chia Pet Costume for a Couple