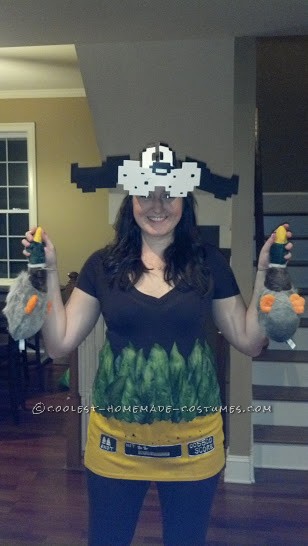 I am never the girl who goes for the “sexy” costume, I go for clever. The one that makes people go “I wish I thought of that”.  I recently moved to a new house and was unpacking my original Nintendo system when the idea of dressing as a different, but still recognizable, Nintendo costume was born.  I already had brown leggings and a brown tee to be the dog’s body, all I needed was the bushes he plays in, his duck winnings, and his head.

For the bushes scene, I took a wide piece of ribbon ($3-4 at Michaels) and hot glued silk leaves from a bushel I got at Michaels (max $10). I also took an old yellow tee, painted the Duck Hunt score screen onto it, and hot glued that under the bush part of the ribbon.  When the piece was complete, it tied on like an apron.  For the ducks, I got two dog toys ($7 each at Petsmart) and attached them to my wrists using hair ties.  For the head, I bought a brown ball cap (~$3 on Amazon) and some black and white foam sheets ($.99 each at Michaels). I cut and painted the pieces to look like a digitized version of his eyes, mouth, and ears and hot glued them onto the hat.

For each piece that I completed, I got more and more excited and reminiscent!  If my Duck Hunt gun still worked, I would have set up the game right there!  I got great reviews this Halloween, and even won “Best Costume” at the party I attended.  This has absolutely been the most inexpensive and unique costume I’ve made to date!