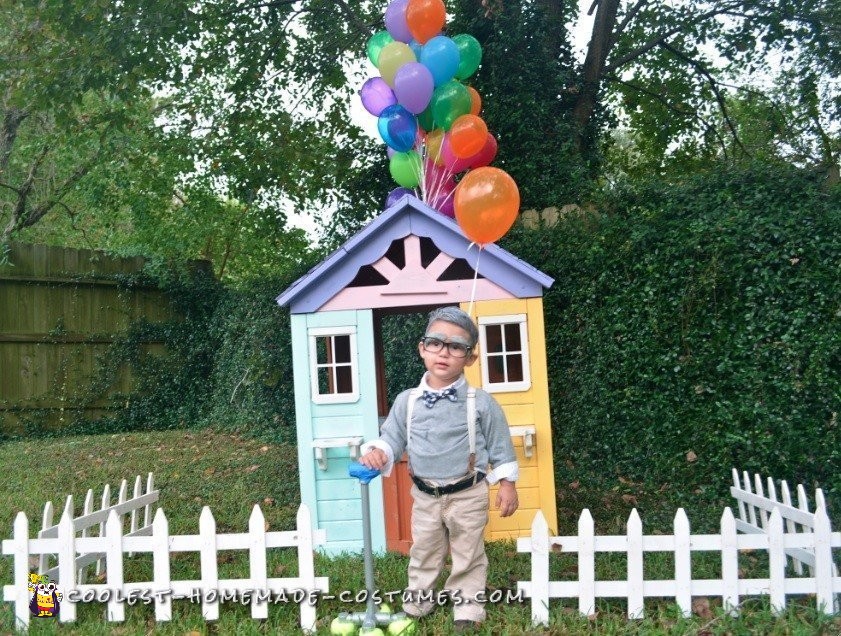 As I get older, it seems the days get shorter, and it reminds me of how fast time flies and life passes by. My toddler is Growing “UP” at rapid speed, and every day as I watch him grow I think to myself,  “If I could only have him as a baby for a little longer I would….”

This year, I wanted to send out a cute Halloween card to all the family with him dressed up in his Halloween Costume. I had no idea what I wanted to do, but I knew that it had to be Awesome! I looked around on different websites trying to stir up ideas but I didn’t see anything I liked. I finally just gave up for the time, and went about my day. About a week later, I was shopping at different yard sales in our community, and I saw the cutest little brown playhouse. Without hesitation, I bought it for my toddler to play with in the backyard. I was sitting outside on my back patio in Mid September sipping coffee, on a cool, crisp fall morning, and my mind wandered back to my son Growing “UP” so fast….. and that’s when it came to me!

It started with starring the house down for about an hour. I was brainstorming different ideas of how I could build a porch and make a paved sidewalk out to a mailbox so the playhouse would look just like the Disney House in the movie “Up”. I thought to myself, this is going to be an Awesome Halloween Card, and I can title the card “Growing UP”—Brennan Schipper–Halloween 2015.  (22 Months Old) Once I made the decision that I was going to use the house as the backdrop for my picture, I knew the best place to get the stuff I needed was a hardware store. Once I got to the store the prices of all these ideas made me snap back into reality. I had to pull back some of the great ideas I had for financial reasons, but I wasn’t going to let that stop me from making it the best that I could.

I knew the play house needed to be painted if I wanted it to be identifiable as the “Up” house, so I made the decision to use spray paint since it dries fast and is less messy. I chose the colors based off the house in the movie. Since I didn’t have the architectural detail of the real house in the movie, I just decided to use a different color for each panel on the playhouse.  I left the door the color it was originally because the “UP” house had a brownish red door, and I thought it looked close enough.  I taped old pizza boxes around the panels that were not getting painted until I finished spraying the section. Once it dried, I did the same for the rest of the panels. I had intended to paint the whole house, but as I was in the middle of this project the idea of doing a Christmas card with a Gingerbread house and my toddler as the “Elf on the Shelf”… I realized if I didn’t paint the back, I could just turn it around and do my Gingerbread look on the backside. (I’m getting started on that next week!!) The final touch was the white picket fence. I looked around at the store, and found just what I needed in the garden section. They were a bit pricey so I just got enough for the front of the house. I decided not to do a stone pathway since the stones were more than I wanted to spend.

Next,  I needed to come up with a walking cane. (I make a lot of fondant cakes and use PVC pipe as support in my cakes) While I was at the hardware store I visited the pipe/ plumbing isle to check and see what I could craft to make a short mini cane that was the perfect size for my toddler. Using an X connector (A 4-way PVC tube connector), I attached 4-curved elbow connectors and pointed them in the downward position. They were stout looking and kind of short, but I knew this wouldn’t matter because they were going to be covered with tennis balls anyway. For the handle, I used a PVC three way connector, and stuck a long PVC pipe in the connection going down. The only problem I encountered was the 4 way connector needed one more hole on the top to connect the straight PVC tube. When I got home, I drilled a hole using the largest drill bit I could find, and then filed out the rest of the area to fit the straight tube. Then I painted it silver. I had planned to tape up the handle to look like a handle but this never ended up happening the closer Halloween got. I bought 4-tennis balls, cut them in the middle and put them on the feet of the walking stick. I also had to trim the straight pipe down to my sons height, but it ended up being fairly simple to do.

The costume, Carl, was easy since the character in the movie was wearing clothes that my son already had. I found in his closet a pair of khaki pants, brown shoes, white button down shirt, and polka dot bow tie, grey sweater, and suspenders. I did buy a brown blazer from the Goodwill since Carl wore that in the movie, but it was way too big, so I opted it out. For his hair, I bought a can of white spray paint. I found some black sunglasses in my junk drawer, and popped out the lenses, then I bought bushy white eyebrows for him to wear. It was all very inexpensive, which I was very happy about since I had spent a fairly decent amount on the props. ($125 for the playhouse, $80 for the spray paint, and other accessories, not including the balloons and helium.)

For the Balloons, I bought a do it yourself helium tank that fills about 35 small balloons. I used every single one of them for the picture. I was quite pleased with the look of it all.

When the pictures were done being taken…(due to rain, an every other weekend schedule, and being sick) the weeks flew by so quickly–I didn’t end up taking the pictures until Halloween day–too late to send out my card but I didn’t care–I had done all this work and was determined to get the pictures taken.

After the photo shoot, when it was time for trick or treating, I took about 15 balloons and tied them to the back of my sons suspenders, so he had a huge cloud over his head. Then we walked down the neighborhood trick or treating with only the costume and the cane. The balloons made the costume recognizable as “UP”.

Overall, the props and pieces for this costume were extremely simple. It just took a little imagination  to come up with it.

From the minute we stepped on the porch at the front door of our first house, we had stops and comments. A large passing group chatted and exclaimed, “Aww, that’s Awesome…. He’s the old man from UP”!! (The cute part was that in the photos I had taken in the backyard–he wasn’t interested in the walking cane, but when we went trick-or-treating he would not put it down or let me hold it at all.) He drug his cane around from block to block. When he got a little tired from walking, he’d actually use it to walk. He was humped over, and almost always a few steps behind me. (Making it even cuter—like I was waiting for an old man.)

A few strangers stopped us and asked if they could take a picture of him, this also happened at a few houses that were handing out candy. I got several comments that it was the best costume they had seen all night! Once I got home that night, I posted the pictures on Facebook (with the house included) and got an enormous amount of shares and likes. I also got comments that I should post it on Pinterest so others could see it & get inspired.

What was meant as a fun Halloween Card, easily turned into memorable night for my toddler and I. while I’m sure he wont remember it, I will have the wonderful “Growing UP” pictures to show him when he’s “All Grown UP!” (I am a single mom, so it was just he and I trick-or-treating.)

One of the coolest concepts about this whole costume is that the actual movie “UP” is about accepting change and growing up. I doubt an adult wearing this costume would have the same affect.

As I struggle with the idea of both of these things, the entire costume/ photo shoot will be something that years from now my son can look back on when he begins to struggle with the same things– and that’s why “Growing UP” is an Awesome Costume Idea! 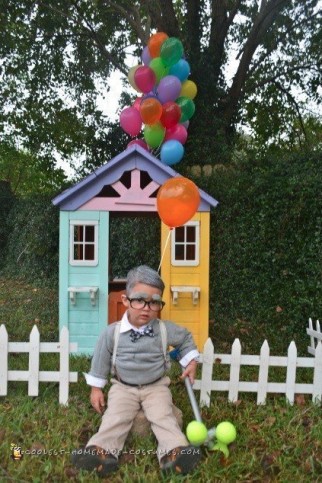 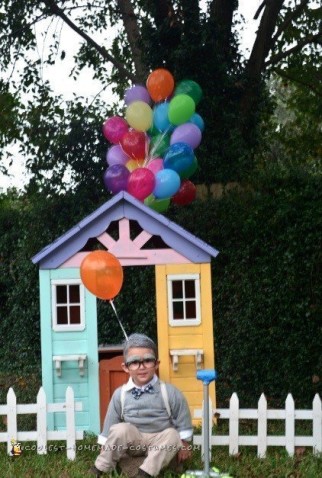 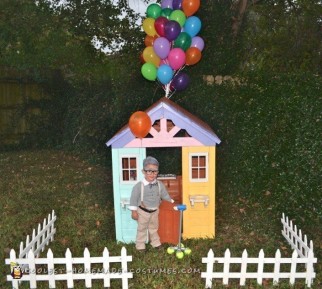 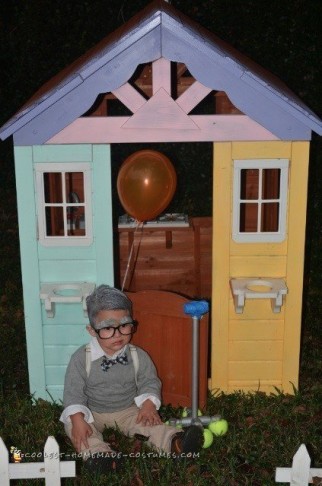 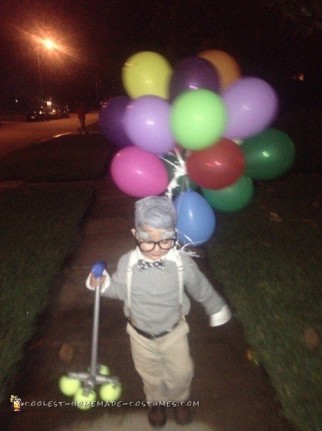 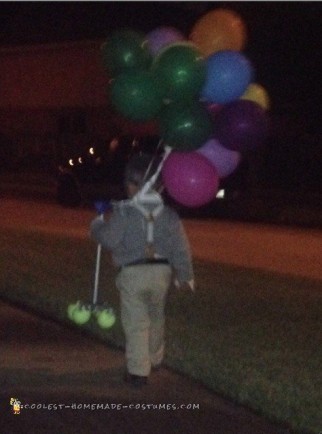