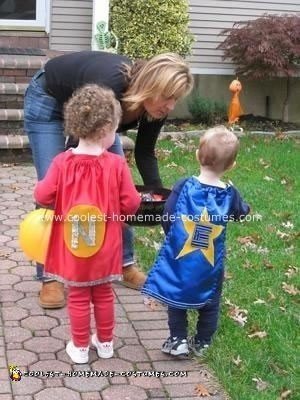 My kids were desperate to be superheroes last Halloween. For months they would run around the house with cloth napkins tucked in their shirts and play ‘superhero’ which became a year-long obsession in our house. There was not a particular hero they knew of or cared about, they just wanted shiny capes! These Superhero Costumes are probably my favorite costume yet, because it really came entirely from their imaginations.

I started with red and blue pajamas, respectively, from Fleece Farm (www.fleecefarm.com), whom I highly recommend for sweatsuits, onesies, pajamas etc. to use for costumes. They’re very reasonably priced. To each shirt I hand stitched a felt shape which I cut out with pinking shears (a star for my son and an oval for my daughter). If you don’t want to get involved in sewing, you could just as easily use heavy double-sided tape or Velcro.

In the middle of each shape, I hot glued their initial, my son’s with embellished ribbon, my daughter’s with sequined roping. For the capes, I used about a half of a yard of satin fabric (I just held it up to their backs and cut it to the best length), and attached a duplicate of the initial/shape from their shirt, with hot glue. I hemmed each side of the cape, creating a sheath, so to speak, to thread grosgrain ribbon through. I also trimmed the bottom of the cape with leftover ribbon and sequin roping. You could just as easily use hemming tape or even staples or use double sided tape or hot glue to hem your edges if you don’t want to sew. You could also leave it un-hemmed and just attached ribbon/sequins, etc. around the cape to hide the edges. I tied the capes on with the grosgrain ribbon.

For their belts, which was kind of an afterthought, I folded a square of felt in half, cut a square out of the middle and threaded more sequined roping through it, and attached it using a safety pin. I covered my daughter’s sneakers with leftover sequins (which fell off during the night)and tape, since I never found the perfect boots.

Everyone got a kick out of their costumes, but none more than they. I can’t tell you how thrilled they were to see their imagination come to life in the mirror. 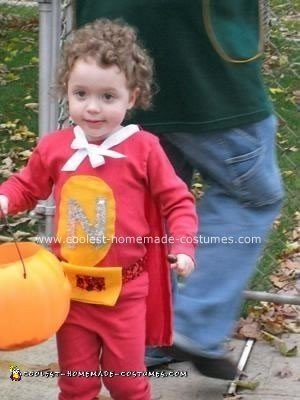 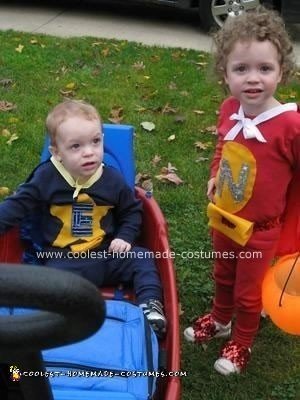