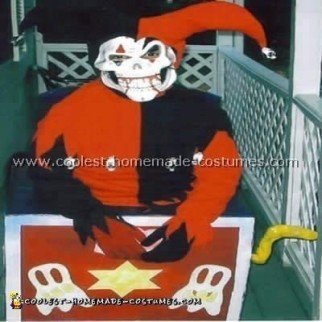 Depending on the size of the children Halloween costume, find a box that your child can fit inside. Cut a round hole in the top of the box which would be the perfect size for sliding in and out of and leaving the bottom open for the footing. Also grab an extra box to make the top. I then spray painted the box your color of choice. I then made drawings of spooky things like ghost etc. I took a hanger, folded it in half then bent it into the shape of a handle, inserted it into the box. Bent both ends of the hanger outwards making it unable to slide back out using duct tape to secure it if you have to. Then what ever color you choose wrap around the hanger then with clear wide tape go over it again so that it will not come undone. I used the color yellow and found yellow bags from my local Dollar General Store and wrapped it around.

To make the top using the spare box I cut a square wide enough to cover the hole on the other box and reaching to the end of the other box. I then poked two holes in one end of the box and folding the opposite end and gluing it down to flap open and shut. Now with the holes on the other end find some string and place the string through the holes and tie in a knot on the other box place two matching holes and make string long enough to open just right place string in other holes tie them into knots also and your top should be able to shut and open perfectly.

I purchased the jester outfit from our local costume store and filled the heading with socks to make the jester hat stay up. I purchased red and black gloves matching the color of the costume and your costume is complete. 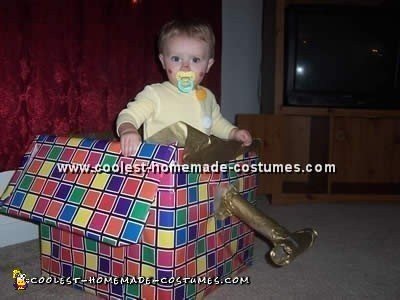 My son’s name is Jack and every year he dresses up as a different Jack character. Last year he was a Jack-in-the-box. We had an old moving box I covered in bright wrapping paper.

I covered an empty paper towel roll in gold tissue paper and used that as the crank/handle. He wore one of his sleepers and I sewed on three pom poms. Lipstick for his cheeks and nose and we were done. It was a huge hit with the neighborhood kids.

I hope you find inspiration for your own children Halloween costume ideas.