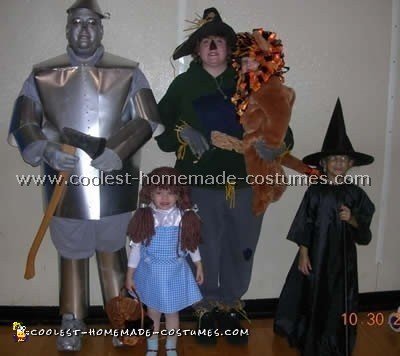 The whole Wizard of Oz costume idea got started when my sister-in-law lent my son a homemade lion costume she had made several years ago for her son. Then my daughter got red sparkle shoes for Christmas and it just seemed like I had to go with it.

My oldest daughter wanted to be a witch anyway so she became the wicked witch. She wore a black witch dress my mother had made for me as a child. It is basically just some satiny black material sewn into a dress with a cinch neck (over the years children as young as four, all the way to adults have worn this costume). I painted her face green and pulled her hair into a ponytail and sprayed her hair black. Her hat was just a cheap witch hat that had been around for a while and I added to long strips of material from the dress just like the witch on the movie. For her broom I took the broom from one of those witches that “fly into a tree or wall” decorations and added a piece of a real broom handle and covered it all with black electrical tape to hold them together.

I can’t say a whole lot about the Wizard of Oz lion costume except that my sister-in-law made the whole thing by hand. Each ribbon of the main is hand sewn. For Dorothy I cheated and bought a Dorothy costume. I put makeup on her face. The eyelashes and the red lipstick really set her off. I gave her a basket with a puppy in it. It was pretty chilly so she actually has stretchy pants on covered with my pantyhose and then blue socks to finish it off.

I was the Wizard of Oz scarecrow. My hat is actually a cloth witch hat that I just pushed to point down inside. I tied a piece of cloth around the hat and added some straw. I sewed some patches on a green hooded sweatshirt, stuck straw in the front pocket and the patches. I wore gray gloves and tied some yellow craft rope around my wrists. I also tied the yellow rope around my waist and ankles. I wore black socks over my shoes. For my face I used brown grease paint to put the triangle on my nose and a few lines to look like the wrinkles of the burlap bag. I actually threw most of the Tin man costume together at the last minute.

My husband worked so much I never had him home enough to make sure my ideas were going to work. I bought a funnel at the dollar store, some poster board and two cans of silver paint. I painted the funnel, some gloves, an old pair of shoes and the poster board with the silver paint. I used a glue gun and tape to hold two poster boards together around his torso. I had to cut half circles out of the top for his arm pits. The rivets are just dots of hot glue. I used two strips to make the shoulder straps. I rolled the poster board into cylinders for his arms and legs. I had measure against his arms and legs to get them right. They needed to be skinner at one end and wider at the other. I also had to cut out half circles for arm pits, elbows and knees. I had made cylinders for his thighs but they wouldn’t stay up and I was out of time to figure it out. There was nothing holding any of them on except him.

I used silver face paint on his whole head (he keeps his hair really short so I just covered his hair too.) I used black eyeliner around his eyes (my husband really loved that part ha ha) and to make the circle on the tip of his nose. Our town has a big Halloween parade and costume contest each year and when we walked into the gym for judging, half the room got quiet, it was the Tin Man that really got their attention. Even later, walking in the parade every few feet someone would say “Look it’s the tin man!” My son took second place in the 0-2 age group for his lion costume and we took first place in the family group!

3 thoughts on “Wizard of Oz Costume”