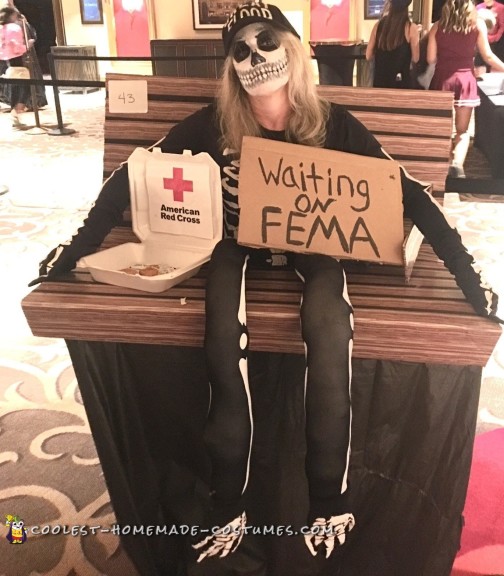 The inspiration from my Waiting on FEMA costume came from a very recent tragedy in my life. On August 13, 2016, “The 1,000 year flood” hit my city and the surrounding cities of Baton Rouge, LA. The unexpected flood brought over 26 inches of rain flooding houses, vehicles, stores and restaurants. That being said, my home and thousands of others took in 4+ feet of water, with some homes being filled with water to the roof. My family and I had to evacuate by boat, in the middle of the night as water was rising rapidly. I’m currently living with my daughter since our home won’t be livable for quite a few months, and this is the case for almost everyone in my city.

After going through this tragedy, it really brought out the best of everyone because we all wanted to help each other anyway we could. We started to rely on the help of our neighbors instead of government support. The biggest trouble was getting help from FEMA since that was what most homeowners were depending on to help them rebuild. FEMA ended up being a letdown for most, and the majority of people are still waiting to receive their money from FEMA, while they live in shelters or with friends/family.

I thought my community could use a good laugh since it’s been such a gloomy time for us. That’s where the name of my costumer came from….”Waiting on FEMA” because most of us feel like we will die before we ever receive help from FEMA. When someone asks, “How are you doing?” everyone just responds with, “WAITING ON FEMA!”

Making my Waiting on FEMA Costume

I (Tammy) am wearing the costume since I was a flood victim myself. I made the bench out of black foam board and covered it with strips of wooden duct tape. My daughter painted my skeleton face makeup and I used an iron-on skeleton for my shirt. I used stick-on letters on my hat (2016 Great Flood) and covered my real legs with a black table cloth. For my legs, I stuffed skeleton tights. I made my “Waiting on FEMA” sign out of cardboard and used Styrofoam for my to-go plate.

The to-go plate was inspired by the meals the Red Cross passed out after the flood. People were outraged and taking the matter to social media because Red Cross was giving out extremely low-proportioned meals. Most contained a couple chicken nuggets and a pack of pudding. While everyone was grateful for anything they were given, it was still frustrating that our own community provided for each other (out-of-pocket) better than government assistant was doing.

Sharing my Waiting on FEMA costume on social media gave Louisiana residents a good laugh because so many people could relate. It was just a little way for us to laugh about this crazy life we are living right now. But our city is rebuilding and we will come back strong…. “LOUISIANA STRONG”! 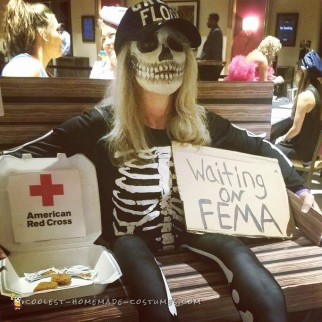