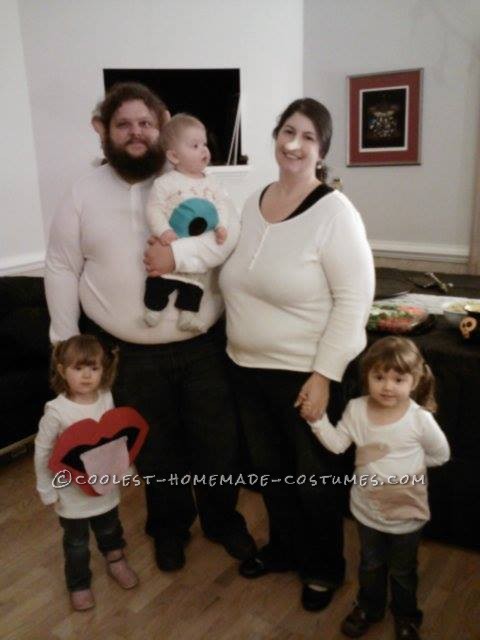 I love family costumes, but found coming up with 5 person costume ideas to be harder than it was when there were just 4 of us. After thinking for a while and surfing lots of lists on line, I started brainstorming things that had the number 5 in them and happened on \”the 5 senses\”!!

I decided that this was definitely the family costume for us this year, but with three kids under three years old, there are some limitations for costumes. I knew that I couldn\’t use hats (no one will wear them) or masks, or face makeup, and they had to be comfortable and easy to take on and off. Last, we were going to a party where my husband and/or I would be carrying the baby for most of the evening, so we needed our arms free.

So I decided to make the kids the stars of the show, with 3-d tshirt costumes and my husband and I did subtler versions of our senses. As you can see in the picture, my daughters were taste (with a free moving tongue) and touch (with a hand wrapped around her whole torso) and our son was one giant eyeball for sight.

Harder to see in the photo, but hilarious in person were the prosthetics that my husband and I wore. He has these giant ears for \’hearing\’ which were hysterical when he was wearing them but are a little lost in the photo. I am wearing a Pinnochio nose for \’smell\’, but should have turned a little more sideways in the photo so you could see it. On the plus side, the baby thought it was an amazing toy and the spirit gum I used held up to a whole night of grabbing, yanking, and pulling.

Although they ended up looking relatively simple and I managed to keep the cost low (something that I don\’t always do for Halloween costumes), I worked quite hard on these and was really proud of the concept and the execution. I wish that we\’d gotten more pictures, but I am glad that we got at least one where everyone was looking at the camera and smiling before all the costumes got salsa spilled on them.

It was a great Halloween and a group costume idea I\’ll be proud of for a long time.