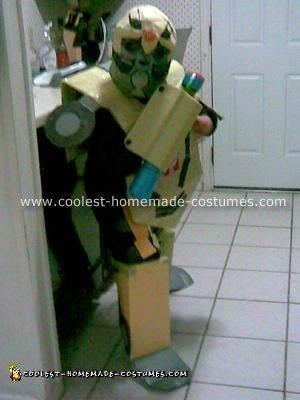 Well last year, I wanted to make my son, Xavier, his favorite character from the Transformer’s movie. So I thought about paper machaeing the helmet that he’ll wear. He gave me this odd look like I’m not gonna wear that. He is hearing impaired by the way so explaining the process was hard to explain to him.

So then I measured his head with some cardboard pieces. Then I had to put his old army helmet under it so I can keep a shape while paper machaeing it.

Then I found a big box that will be for his body. I measured him and found it was a good size then I taped on the doors from more cardboard boxes. I was really pressed for time since I started my project like a week and a half before Halloween. Not smart.

So, come Halloween day I was non-stop making the face of Bumble bee by looking a picture of him, and trying to recreate everything by permanent marker and duct tape for the color grey on his face. I then used some left over yellow paint for the the top part of his helmet. I finished and was happy with it like around 2 in the afternoon.

So now what do I do for the color yellow for the rest of his body? With no money, I thought about Dollor General bags! I raced to the store right away and asked the lady if I could have a whole bunch of unused bags. She gave me a weird look as well, but was like “how many?” I said like “10”?

I was only able to use one side of each bag since the other side had the logo of the store on it,(that will come in handy later).

For the black stripes of his costume is where those lines from the logo came in handy. Then I taped the cut-out sheets that I made onto the cardboards and it was coming out very nicely.

Now on to his arms and legs. I didn’t want him to walk all bow-legged or have a hard time going from house to house so instead of making a complete rectangle for them I took shoe boxes that we still had and cut an opening for the knee to go just right, like half of a circle and same thing on the opposite side. Then, to keep it on, I found my husband’s old chef uniforms and took the buttons off and used those. I tied ponytail bands to each of them, then I made holes small enough for the buttons to squeeze through, but not all the way. I used more bags to make them yellow as well.

What else? Oh, I had him put on his old Batman costume from the year before so that he would have black underneath all the cardboard. I took a cool Transformer’s emblem from one of his books and stuck it on the front.

I really was quite pleased with how it came out. Xavier was then wanting me to make it transform. Now that is where I am stumped. This year he can’t decide to be Optimus or Starscream. We’ll see.