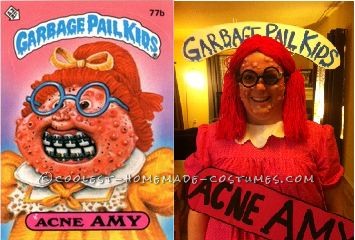 I’ve always wanted to be a Garbage Pail Kid for Halloween. It’s a iconic symbol from my childhood and hey, they’re disgusting! When else do you get to be totally gross and really disturbing to look at? Also, I wanted people to be totally grossed out by the process. I got EXACTLY those results with this gross homemade Acne Amy POPS up on Halloween costume. This has been one of my favorite costumes so far. I can’t recommend choosing something you have no idea how to do and figuring it out. If only Halloween were more than once a year.

My first task was to find out which GPK I wanted to be. I’d already seen the handmade costumes on this site with the full heads and knew that while that was ridiculously incredible, I didn’t have the time or effort to be that crazy. I have started experimenting with special fx makeup for other skin textures and things but I am no pro. So…after toiling over my character choice I ended up choosing Acne Amy. Perfect, right?!

Setup your process and call your Mom

To start I studied the card in detail and then immediately called my Mom. I had to bring in the big guns. Mostly because I didn’t have the time to make the dress myself and she’s much better and the sewing part of this. Once that was in action I hit the streets (or YouTube) to find out as much as I could on fake acne makeup tricks. Turns out, most people want to cover up acne, not create it. Just my luck. So I found a few good resources and made up my own game plan. I decided I was going to make the acne out of wax so I then visited my local party store to find some supplies.

Unfortunately the things that they had there, specifically Nose & Scar Wax was way too sticky and pliable to use. So instead I had to turn to my local theater makeup store. I bought some other wax there, while this was a bit more stiff it was still pretty soft so that if someone touched the acne it would dent/bend/scrape off. So it’s important to have spirit gum to glue on the mounds of wax and a wax sealer over the top to try to seal the wax as best as possible. 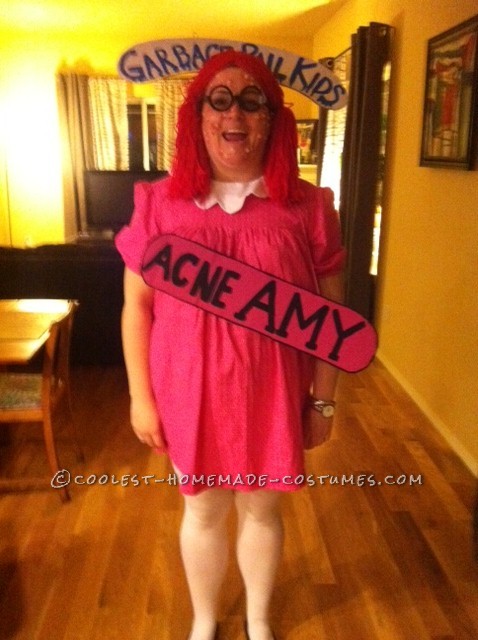 Bring on the Acne! (said no one ever)

I started with a few practice runs, mostly on my forehead. That was my first problem. Your forehead is a much firmer surface for the acne and I didn’t try it on my cheeks or chin until the day of Halloween. Ooops! Not a big deal but just a time factor and consideration you should note. To create your acne:

Seal wax: Apply the wax sealant to your wax. I highly recommend adding all of your zits first then sealing them.

Apply makeup: It’s much easier to apply makeup to your entire face instead of sections. I had a color palette of makeup from the party store that has white, skin color, green, yellow, brown and red. This is perfect palette for acne. I tried to make it realistic looking so I used skin color and yellow accents to make it look pussy and infected. Then I covered the acne with red to make them look inflamed. I small shadow with brown right at the base of the zit also helps!

This is time consuming! They will fall off throughout the night. Mostly because so many people want to touch your face. This took me about 1.5 hours to get the full effect.

Also, if will take longer (and the zits will fall off) if you apply this in a hot room or house. Turn the fireplace off! It will save you time in the long run. 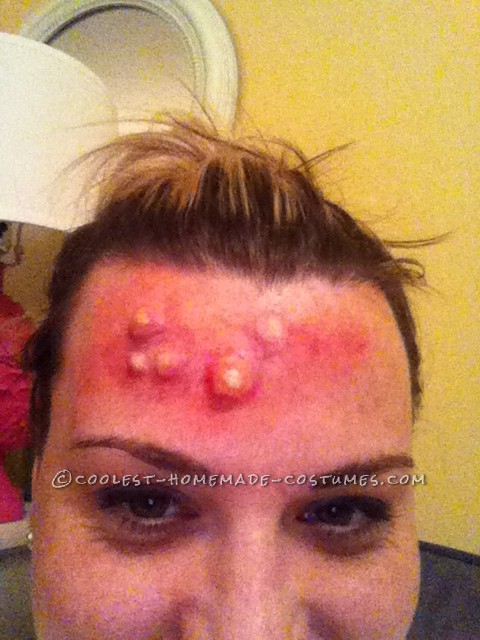 Bring it all Together

I purchased the doll wig and the fake glasses at the party store. I tried to put the wig in a pony tail but the way it’s made it’s best suited for pig tails. I took some minor creative license on what I was going to do or not.

I bought some white tights to complete the look of a little girl (and my Mom’s sewing skills rocked the dress!) I wanted to make the signs from the card so with cardboard I cutout and painted the words and font the best I could. I ended up attaching the “Garbage Pail Kids” sign to a headband that I then wore under the wig and cut 2 holes for the wires that I pushed through the cardboard. Voila! Homemade Garbage Pail Kid.

And it was disgustingly amazing! It was so worth it! 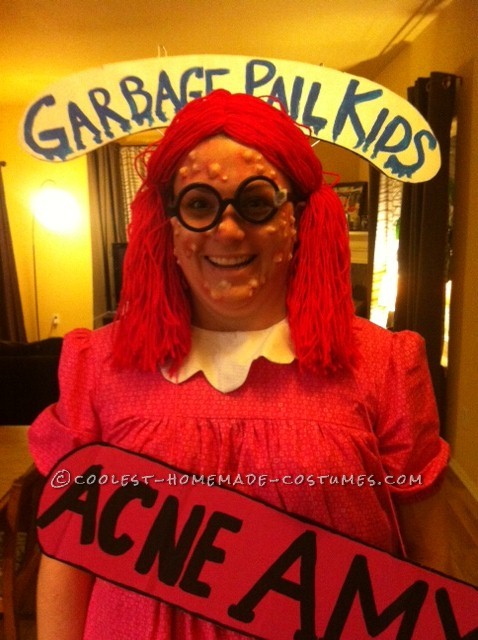