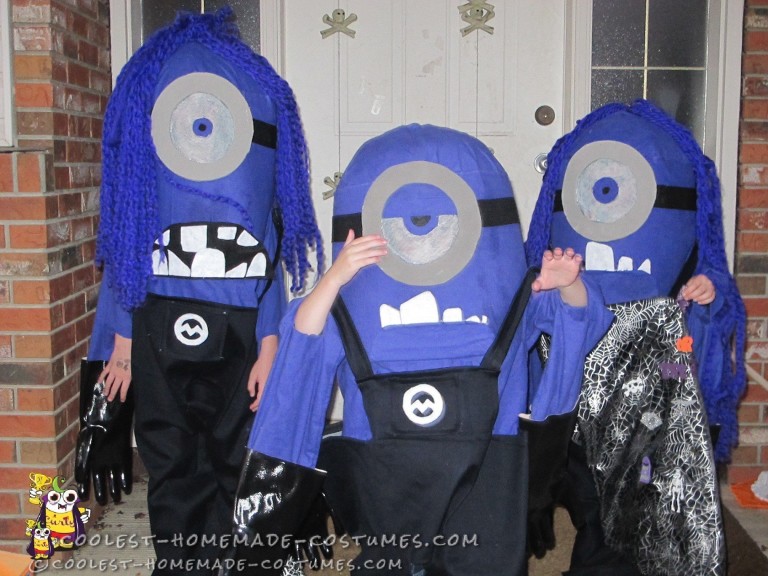 Here’s the story behind our Evil Purple Minion DIY costumes.

My boys LOVED the Minions 2 movie. They thought that the purple Minions were awesome, so they decided that was going to be their choice of Halloween costumes. So, after scouring the racks at the department stores, I ended my search unsuccessful. I decided that although it would be a HUGE undertaking (because I have three boys) that I would make them costumes instead.

I googled homemade Minions Costume. I found a short you tube video on making one out of camping foam. It gave me a start of how to form the head and the rest I did by guessing.

I bought all the supplies I would need for our DIY costumes – camping foam, purple yarn, purple fabric, dark denim, spray glue, paint, etc…and got started. It was a very difficult project, not just because I had three to make, but also that they all wanted to have different characteristics than their brothers. I had to do different faces for them so that we could tell them apart- and who would want to have the same costume as their sibling?

Making these DIY costumes was trial and error in a lot of ways. I discovered that spray glue was VERY hard to use indoors without getting other things stuck together.

After about a month and a half of working on their costumes nightly, I FINALLY got the finished product! My kids were THRILLED! I have had nothing but compliments on them, and people even have asked if they can take their picture.

This costume is perfect for reuse as well – all I have to do is extend the legs if they grow a little. If they choose, they can wear this costume as many times as they want.

There is nothing better than the memory of your Mom making a homemade costume for you. My Mom did it for me and I will do it for my kids. It is then that you see originality and creativity shine.